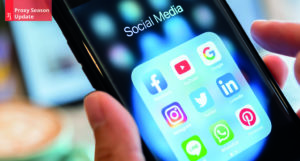 The historic shareholder revolt at Exxon last month, which saw investors replace three of the oil giant’s board with their own ‘climate competent’ picks, sent a clear message to boards across the world: failure to prepare for the low-carbon transition is now a sackable offence.

Board competence on the ‘S’ of ESG, however, does not seem to be anywhere near as high on the agenda for investors, judging by support for resolutions at Facebook, Twitter and Alphabet recently.

The Californian tech giants were asked in a proposal filed by US activist investor Arjuna Capital to nominate a human rights expert for election to their boards. But just 4% of investors supported the proposal at Facebook; 10% at Alphabet; and 14% at Twitter.

The proposals included examples of the firms’ roles in controversies such as voter suppression, misinformation and hate speech.

“Human and civil rights abuses at the social media companies represent the same kind of existential crisis the big oil companies face on climate change – their social license to operate is at risk, and you see that materialising now through much of the anti-trust action they are undergoing,” Natasha Lamb, Arjuna’s Director of Equity Research & Shareholder Engagement, told RI, referring to lawsuits against the firms. “If they don’t clean up their mess regulators will step in, and it’s critical investors make their concerns heard.”

Another proposal at Facebook, calling for a report on child exploitation risks, received 17% support – up from 13% last year.

These low tallies might not reflect investor sentiment, though, given the prevalence of dual class share structures in the tech world, which skew the outcomes by giving management more voting power per share.

Facebook founder Mark Zuckerberg, for example, casts more than half of the firm’s votes, despite owning less than 13% of the stock. That means that, according to calculations by US non-profit Open Mic, support for the child exploitation proposal represented 56% of non-management votes.

A proposal calling for the social media giant to ditch the controversial share structure was supported by more than 90% of independent shareholders this year, Open Mic says; but that amounts to just 27% when all votes are considered. Just shy of a third of all investors in Alphabet (31%), supported a similar resolution this year.

Investors turn on directors at Netflix over governance

In recent years, Netflix has been accused of ignoring the results of more than 20 votes that have received majority support from shareholders. Four of those resolutions were calling for the introduction of a ‘simple majority’ rule that would allow votes to pass with more than 50% support.

In response, all four of the firm’s directors up for reelection faced significant levels of opposition this year, with around 65% of shareholders reportedly rejecting Richard Barton (CEO of US online real estate marketplace Zillow Group) and 53% rejecting Brad Smith (President of Microsoft).

Ironically, it is the ‘supermajority’ threshold – which requires more than two thirds of shareholders to oppose a nomination – that will prevent the directors losing their positions.

For the fifth time, investors also voted on the ‘simple majority’ rule, with 81% coming out in support.

More than 70% of independent shareholders in Thomson Reuters reportedly backed a human rights proposal at the media-cum-data firm’s AGM this week (that’s just 19% when all votes are included, as the Thomson family holds 66% of voting shares).

The proposal, filed by the British Columbia Government and Service Employees’ Union’s (BCGEU), asked the Canada-based firm for the second year in a row to assess the human rights risks posed by its contract with US law enforcement agencies such as Immigration and Customs Enforcement, which has been at the centre of concerns about its treatment of immigrants.

The 70% support was more than double its tally last year, buoyed in part by the backing of both major proxy advisors ISS and Glass Lewis.

More than a fifth of investors (22%) supported a proposal at Comcast calling on the telecommunications giant, which owns US TV network NBC, to report on the risks posed by its alleged failure to prevent workplace sexual harassment. Last year, the same proposal, also filed by Arjuna Capital, was supported by just 13% of shareholders.

The majority (59%) of shareholders in Californian solar firm Sunrun supported a proposal calling for a report into the impacts of its use of mandatory arbitration on employees and workplace culture. Mandatory arbitration is the use of contracts that require employees to have claims dealt with internally rather than through the courts, a practice facing significant regulatory pushback at both the federal and state level in the US. The proposal was filed by US activist investor Nia Capital.

Last year, a majority of investors (51%) in US fast food chain Chipotle supported a similar proposal filed by the Office of the New York City Comptroller, Scott Stringer.

Next week sees a Paris-aligned lobbying proposal go to the vote at Delta Air Lines. Last year, the same proposal, filed by BNP Paribas Asset Management, was supported by a hefty 46% of shareholders. California public pension giant CalPERS has already thrown its weight behind the resolution and called on other shareholders to do likewise in a filing with the US regulator. BNP Paribas leads engagement with Delta as part of Climate Action 100+ (CA100+), and it’s asking the firm to report on how its lobbying aligns with the goals of the Paris Accord.

Earlier this week, another proposal at a CA100+ target – manufacturing giant Caterpillar – was supported by 47% of investors. That proposal, filed by US non-profit As You Sow, asked the US company to report on how its policies and performance align with the progress indicators laid out in the CA100+ Net-Zero Company Benchmark, the transition monitoring tool published by the $54trn investor group last year.

“Without measurable and comprehensive emissions targets and plans, shareowners have to assume that Caterpillar as an enterprise will become increasingly less competitive in a low carbon economy,” said As You Sow’s President Danielle Fugere.