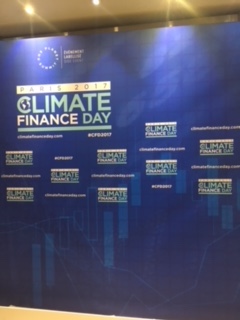 France can’t be accused of inaction on climate finance. As RI has pointed out, President Emmanuel Macron was elected with a firm policy commitment to the sector:

He holds his giant One Planet conference today in Paris, inviting 60+ global heads of government to renew their pledges two years ago at the COP21 Paris summit.
Away from the big government climate jamboree, however, yesterday’s (December 11) Paris Climate Finance Day, was closer to the agenda of investors. Bruno Le Maire, France’s Minister of Economy and Finance could be forgiven a bit of drama, closing the event by saying: “Finance will be green or it won’t exist anymore.” Although sadly that was without a commitment on a date….

Forgiven, because the government is backing up its words with actions, which it believes will translate into economic responses.
Among a raft of initiatives, Le Maire announced a French-Swedish government partnership on green financial instruments, a desire to promote SRI and green fund labels at the European level to create “one label that could help supervisors do their work”, and an upping of France’s treasury commitment to green bonds, currently at some €10bn, to be added to next week, and then furthered next year.

France, Le Maire said, has also joined the Green Bond Principles and set up a Council for Green Bond Evaluation “to make sure that each euro spent from green bonds goes clearly on green projects”.

It is also mobilising its public finance units – representing some €600bn in assets – including the €36bn Fonds de réserve pour les retraites (FRR), the country’s state pension reserve fund. They have signed a new charter to integrate climate impact in all their investment decisions.

Domestically, France is also enabling funds within its huge life assurance funds market (assurance vie) to badge themselves with a ‘prima’ label if their investments meet environmental investment criteria.

Le Maire also guaranteed that all tax-exempt savings funds in France, known as ‘livrets’, that are labelled ‘sustainable development’ – an €100bn market – would have to clearly demonstrate the greenness of their investments.

Per Bolund, Sweden’s Minister for Financial Markets and Consumer Affairs and Deputy Minister for Finance, joined the party, announcing that the country’s Financial Services Agency would include its work in assessing the risks at financial services groups. Significantly, he said the country’s six AP buffer pension funds, representing collectively a couple of hundred millions of euros of assets, would now invest their money in line with the 2 degrees warming limit agreed at COP21 and aim to take into account the UN Sustainable Development Goals.In addition, fund managers running money for Swedish state pensions will have to clearly explain their approach to green investments.
Sweden, he said, was also now looking at launching a green sovereign bond and an expert group is looking at the issuance criteria.

Bravo France and Sweden then; both of whom have also officially backed the climate reporting framework of the Taskforce on Climate Related Financial Disclosures (TCFD), which it was announced is now backed by 237 companies with a combined market capitalization of over $6.3 trillion.

It’s hard though not to be impressed by China’s commitment to green finance. Ma Jun is special advisor to the governor at the People’s Bank of China and chairman, Green Finance Committee of China Society for Finance and Banking.

China, he said, needs 4trillion RMB ($600bn) for green investments, and notably has set up a green lending facility for local government investment funds, which Ma said was designed “to lower funding costs and bring the market in”.

By next year, this will apply to all listed companies on a comply-or-explain basis. And by 2020, the explain option will be abandoned, meaning all listed companies will have to comply. Ma said the reporting requirements represented Chinese values of firm regulation and implementation.

Ma, who headed the recent G20 Green Finance Study Group, added that Chinese investments overseas – notably the massive Belt and Road infrastructure plan – also needed to be green, and that Beijing was talking to finance capitals such as London and Paris on initiatives such as how to grow its existing green bond issuance, the world’s largest by country at €20bn+.

Outside of the top-down commitments by policy makers, conference talk by investors was how to move market mechanisms for climate financing.

Hiro Mizuno, executive managing director and CIO of the $1.3 trillion Government Pension Investment Fund (GPIF), the world’s largest pension fund, noted that 70% of its giant portfolio is indexed, and therefore it was engaging with benchmark providers about building indices that will enable better ESG-based investment towards the green transition.

Philipp Hildebrand, vice chairman at Blackrock, the world’s biggest fund manager, added weight to that call: “We need new ESG benchmarks… if the index providers don’t move enough this way we will have to create our own tools.”

Blackrock’s huge passive portfolios, said Hildebrand, meant that fiduciary engagement on behalf of its clients was its only real option for moving portfolio companies on climate.

Yngve Slyngstad, CEO at Norges Bank Investment Management, which runs the country’s massive oil fund, said that just 550 companies, out of a portfolio of thousands, provided good C02 data, and therefore the fund was engaging strongly to get clear improvement here.

He said the fund was also looking at excluding electricity generating companies that use more than 30% coal in power production.

Heffa Schücking, German environmentalist and director at Urgewald, the NGO, provided a reality check on coal divestment. Of 775 parent companies on Urgewald’s “Global Coal Exit List”, 440 are planning expansion of existing coal mines: “That’s despite scientists telling us there must be no new coal.” She noted that Blackrock was the world’s largest institutional investor in coal plant developers, meaning its engagement would have to be extremely meaningful to ensure any change.For banks, Laurent Mignon, CEO of Natixis, the French banking group, said the best way of encouraging significant investment in green assets was to lower the risk weighting required to below that of non-green assets: “We have these kinds of incentives for financing SMEs, so why not for climate? We hope that we get some traction on this at the EU level.”

Anne Le Lorier, first deputy governor at the Bank of France, echoed the call for some kind of ‘handicap’ on brown assets that may already be stranded.

But, she reminded delegates that the economy would not respond fully to climate change in the absence of a price on carbon: “I call on the authorities to provide the markets with a reliable, prospective, carbon price, and better definitions on what is truly ‘green’ because we have ‘fifty shades of green’ at the moment.”

France is certainly backing up its leadership from COP21, and finance is now being rightly put at the centre of finding climate solutions.

Philippe Zaouati, CEO at Mirova and chair of Finance for Tomorrow, the Paris lobby group for sustainable finance, which now has 50 members, announced that Paris Climate Finance Day would be an annual event. C’est une bonne nouvelle.