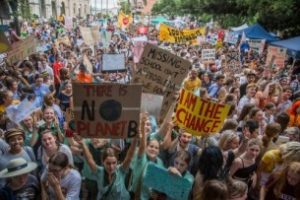 Starting this week from September 20-27 students around the world are taking to the streets to demand more effective climate action – and they want the adults to join them. Unions and NGOs are pledging to bolster the numbers. But there’s one sector that’s notably absent: finance.
Responsible Investor will be joining the climate strike. So we set out to find other individuals and organisations in sustainable finance who will be taking part. We emailed a host of the founding PRI signatories as well as others regarded as leaders in responsible investment. We sent out several requests on professional networking site LinkedIn.
While the PRI itself is attending the march on the 20th, and doing staff-based activities in the office, for the most part the response from PRI signatories was lukewarm at best. AP2, BNP Paribas and Carbone 4 all said they were not participating. Impax, the sustainability specialist impact manager, said: “Impax have no comment on this”.
Hermes and MSCI apologised, saying: “This isn’t one we can help you with.”
This is not to single out those that did take the time to reply, because we got no conclusive response from a range of institutions involved in ESG to varying degrees.
They include, in no particular order: Brunel, PKA, FRR, HESTA, Ircantec, ERAPF, USS, Folksam, WHEB, Aviva, Storebrand, BMO Global Asset Management, Legal & General, Willis Towers Watson, Redington, Aon Hewitt and Vigeo Eiris.
What’s behind the reluctance? Preventable Surprises’ Raj Thamotheram says he’s not surprised at the silence. He says many ESG professionals don’t believe campaigning is the most productive use of their time. Indeed, when asked by RI, BNP Paribas Asset Management said it believes “there are other ways of acting to address climate change”, citing its corporate engagement and lobbying activities and membership of industry groups including Climate Action 100+ and theInstitutional Investors Group on Climate Change (IIGCC). NZ Super, the New Zealand national pension fund, said its Head of Responsible Investment, Anne-Maree O’Connor, will be at the UN leaders summit that week, working on the One Planet Sovereign Wealth Fund initiative. It did not say whether it would support employees hoping to strike. Environmental and sustainable finance NGOs, by and large, are, perhaps less surprisingly, on board to down tools. ShareAction are supportive of the climate stoppage, with many staff attending demonstrations, although it is not closing its office. CDP is giving staff paid time off to attend the protest, and many are planning to do so. BankTrack and 350.org are both actively supporting the strike.
But this will hardly urge finance professionals out of the woodwork: “Our sector has only recently managed to convince traditional investment colleagues that we aren’t ‘NGOs in suits’,” Thamotheram says. “Some think this would set us right back.”
However, some investors are cautiously supportive. The Church of England said it would encourage line managers to be “sympathetic towards any individual staff requests to use a half day’s leave or accumulated flexi-leave for this purpose”. Sustainalytics said it would “make it easy for employees to participate individually” and said the firm applauds “the advocacy efforts of those organizing and participating in the strike”.
Generation Investment Management says its staff should observe the strike “as they see fit in line with their values,” but has “not mandated a firm-wide approach”. The UK Environment Agency has “provided guidance so that anyone who wants to take part will feel comfortable doing so”, according to its chair, Emma Howard Boyd.
ABP in the Netherlands has no organization wide plans to go on strike, but said: “When school children were on strike earlier this year we started a dialogue on social media with our participants, being the pension fund for the government and education employees. Most likely that will be the case again during this strike.”
Jillian Reid in Mercer’s Sydney office, meanwhile, is breaking the individual mould and vocally supporting the action. The Mercer RI team by region, together

with a number of their consulting colleagues, will be well represented. Reid says: “Striking is not standard procedure for many ‘white collar’ types and the term won’t sit well with everyone. But, as Bill McKibben said” ‘while we’re not striking for more wages, we are striking for better conditions’. Reid stresses the importance of the protest colliding with the workplace: “There may be many in our industry who have never joined a demonstration, as well as many who have walked with thousands or millions for change about the war in Iraq or housing, refugees, or marriage equality. The difference is this one is on a Friday and so the personal meets the professional head on.” Reid has found a platform to bring others together through the C40 City of Sydney Women4Climate group. “My work, and what I’ve learnt in doing that work, makes participating in this global event seem obvious to me. However, it does make it easier with some seniority, supportive colleagues, a flexible work environment, and being part of a group of 20 climate-related professionals, backed by 20 mentors and 94 cities committed to climate action, who are publicly speaking up.”Australian superannuation fund, Future Super, has also said it will be shutting down on September 20 to allow its workers to attend the strike.
And some professionals may choose to lend their support, but stay incognito. Thamotheram argues that a visible white collar presence on the ground would give the strike more weight: “The best way to get early and genuine political and corporate action is to bring forward the social tipping points. This, after all, is where some of the big uncertainty rests. Compared to spending an extra four hours on the day job, supporting youth and millennial campaigners and learning how to communicate with them is probably much more useful.”
Will suited finance professionals turn up to Friday’s strike clutching their latest sustainability reports? Being there won’t replace the work being done in sustainable finance, but it may focus minds on the urgency of that work and the related necessity for broad people power and political pressure to underpin the change needed.
RI hopes to see you there!