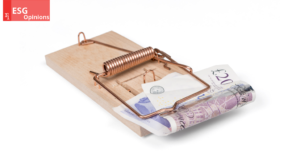 Beyond Glasgow’s COP26 aspirational announcements and commitments, real world activity will continue to be propelled by economics and constrained by regulation.

When any activity is both permitted and profitable, its voluntary cessation by one group merely creates a vacuum filled by others able to capture its profits. The profitability of an activity can be disrupted by external forces, as when battery technology improvements reduce demand for fossil fuels. But public policy can also be used to neutralise such disruption, for instance, via higher taxes on electric versus fossil-fuelled vehicles.

This asymmetry means that public policy is the lever for real-world change.  Action on climate (or anything else) cannot advance without accommodative policy.  Yet, while many investors recognise this, they are yet to appreciate its full implications.

Diversified investors need to offset profits from climate-destructive activity against climate-related portfolio impairments, such as when physical assets they own are damaged by extreme weather. The impairment to economies on which portfolios rely is larger, but less visible. To take the example of just one component, the loss of labour hours due to heat is estimated at 295 billion hours in 2020, with lost wages for agricultural workers equivalent to 4-8% of GDP in some countries.

Yet climate outcomes are not the only way in which policy distortions damage investment outcomes.

Company resources directed to policy influence are not available for R&D or business model innovation, weakening the company’s ability to adapt to foreseeable policy shifts. This creates further incentive for those companies to divert resources to policy influence rather than real value creation efforts.

Similar disincentives operate across the portfolio. Policies that advantage one industry or sector (e.g. fossil fuel subsidies) disadvantage its competitors (e.g. renewable energy technology retailers) undermining their returns and hindering efficient allocation of capital, talent, infrastructure capacity and other inputs across the economy.

The opportunity cost of this misallocation is orders of magnitude greater when the disincentives and resulting underinvestment in other activities and enterprises mean their innovations, productivity enhancements and developments are lost to the economy and all investors who rely on its long-term growth.

When an industry’s influence systematically distorts the activities of a public institution, the institution is said to be “captured.”

Public institutions can be captured via influence that is direct and indirect; legal and illegal; with or without the institution’s (or its representatives’) awareness.  This includes cash and in-kind contributions that create a sense of reciprocity with decision-makers; or which cause the inputs into their decisions to be skewed (e.g. sympathetic research from think-tanks; fanning ‘community’ opposition).  It also includes empowering decision-makers sympathetic to the industry via political contributions or activism (e.g. political advertising).

Regardless of whether it is legal, capture resembles other forms of corruption in causing broad-based collateral damage. By damaging public trust, capture is likely to erode the social capital which facilitates and lubricates civic, economic, and entrepreneurial activity. This impairs the effective functioning of even those institutions that remain uncompromised, such as when populations resist legitimate public health advice due to mistrust of government.

Companies and industries often have large, concentrated, and quantifiable exposures to policy changes, and can justify deploying well-resourced efforts to influence policy outcomes, including through capture.

In contrast, while the costs to others (described in sections above) are much larger, these are also distributed across many other economic entities, making it difficult for any single actor to justify investing in an effective defence.

Economic investors, such as those with long term liabilities and highly diversified exposures, are among the few entities with the economic incentive and ability to defend strong, effective and accountable public institutions.

Economic investors have a vital interest in

Three distinct groups of companies warrant action from investors wishing to defend public institutions from being captured by specific interest groups, in support of climate or other outcomes. Each requires separate treatment, given very high variation in their susceptibility to investor action.

The largest group of companies is implicated, often inadvertently, through the activity occurring in its influence supply chain, such as business groups involved in policy advocacy and media companies implicated in misinformation (in which this group advertises). Of the three groups, this is likely to be the easiest group for investors to address.

Investors can support these companies to identify and address instances where their own interests are being undermined by their influence supply chain. In recent examples, such investor action has led to mining firms withdrawing support from industry groups whose lobbying undermines their climate interests. On other issues, consumer companies have withdrawn advertising budgets from programs, publications or platforms.

This group may also include many investors themselves, as when an insurer facing spiralling climate-related costs advertises in media that undermines public support for policy action.

A second group includes those whose business is information and influence, including lobbying firms, publishers and content platforms. These will be of greatest importance in jurisdictions where public institutions and their decision-makers are sensitive to these levers or to public sentiment affected by these levers.

Investors should review both their shareholder and their customer relationships with these companies, just as they are attentive to human rights or other environmental issues arising from their physical supply chains.

The final group is composed of companies that rely on government largesse (such as subsidies or licences) or latitude (e.g. to continue to pollute).

Investors are rightly growing more attentive to this group’s public policy activities.  However, these groups have an incentive to invest heavily in influence, directly and via third parties, such as industry associations and lobbyists, as well as through political donations, favours and similar activities. This means that the most commonly used active ownership tools (seeking effective oversight, management, control, transparency) are likely too anaemic to produce effective outcomes with this group. Therefore, investors should prioritise more assertive action.

Some directors will be swift to discipline the company’s influence once alerted to the issues (particularly if they are in the first group, above). Others will be reluctant to subordinate near term commercial priorities to public integrity imperatives, particularly in business communities where norms concerning ethical restraint have eroded.

Investors in these contexts must support companies to re-establish such foundations, via attention to company director qualities and commitments.

Policies are the main expression of a company board’s commitments. Effective influence policies are those that:

Directors are ultimately responsible for the company’s use of influence and the policies governing these. Directors better placed to support public integrity imperatives (and thus the interests of diversified investors) are those who:

1. explicitly seek the above attributes, commitments and behaviours from company directors;

2. evaluate director responsiveness to these expectations;

3. support the election of directors who evidence the willingness and ability to fulfil these expectations.

Addressing issues at individual companies is necessary but insufficient, and unlikely to be achieved for all companies, for reasons described above. System-focused investor action must therefore include assertive advocacy in support of anti-corruption initiatives that encompass institutional capture, such as those outlined by the OECD. This includes:

Sustained, concerted and co-ordinated cross-sector collaboration is needed to combat damage to public institutions. This will not necessarily deliver quick wins or attractive soundbites.

However, for responsible investors whose priorities are protecting the climate, the performance of economies, and their own portfolio returns attributable to economic growth; it is by far the most urgent, consequential work to be done, on climate, and beyond.

Susheela Peres da Costa is Head of Advisory at Regnan. She is a director of The Shareholder Commons and chairs the Responsible Investment Association of Australasia.