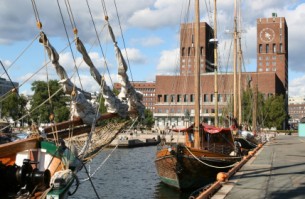 The €250bn ($366bn) Norwegian Government Pension Fund has extended its boycott of companies involved in the production of cluster bombs and nuclear weapons by banning investments in GenCorp, the US aerospace and defence company and Serco Group, the UK service engineering company. The fund has also added Hanwha Corporation, a South Korean chemicals company to its investment blacklist, which now totals more than 20 companies. The fund pulled back from a proposed ban on Rheinmetall, the German technology and defence company, after research by the Norwegian government Council on Ethics found the company had stopped producing components for cluster bombs. The extension of the Norwegian fund’s investment blacklist comes ahead of a major conference it is hosting in Oslo this week on the subject of corporate social and environmental institutional investment. The conference, titled: “Investing for the Future” is organised by the Norwegian Ministry of Finance, together with Norges Bank, the fund manager of the Government Pension Fund, and the fund’s Council on Ethics. Speakers include HRH Norway’s Crown Prince Haakon and Kristin Halvorsen, Norwegian Minister of Finance. Regarding thenew boycotts, the Norwegian fund said GenCorp had not responded to its approaches about its business dealings.
It said Serco Group had confirmed its involvement in a joint venture with the Atomic Weapons Establishment under which it maintains the nuclear weapons of the United Kingdom. Hanwha confirmed to the fund by letter that it produces air- and ground-delivered cluster munitions. Kristin Halvorsen, said: “According to the Council on Ethics, these companies produce cluster munitions and nuclear weapons, respectively, and we cannot participate in the funding of this type of production. The Norwegian pension fund has already excluded investments in seven producers of cluster bombs and nine producers of nuclear weapons. It said the disposal of shares in the newly blacklisted companies had been completed prior to the latest announcement. The Norwegian fund’s investment boycotts are closely monitored by other investors worldwide. In December last year, the fund pulled €9m in shares from Vedanta Resources, the FTSE 250 metals and mining group, over allegations of environmental damage and human rights abuses in India. Responsible Investor will report this week from the Norwegian conference via a special alert.