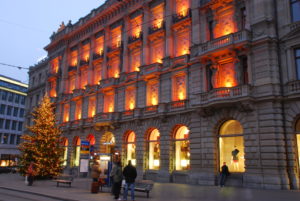 Credit Suisse has included the protection of indigenous communities’ rights into its internal guidelines on project finance following a complaint under the OECD human rights grievance system on its financial ties with the controversial Dakota Access Pipeline (DAPL).

The decision comes after over two years of mediation between the Swiss banking giant and the Society for Threatened People (STP) campaign group, which lodged a complaint with the Swiss ‘OECD National Contact Point’, which is hosted by the State Secretariat for Economic Affairs.

The NCP system is a method by which issues can be highlighted under the OECD’s Guidelines for Multinational Enterprises, a ‘soft law’ mechanism last updated in 2011. It has been used by campaigners in the past at banks like ANZ Group and ING.

It came onto the radar screen of for institutional investors due to the ‘POSCO’ test case that was brought by a group of NGOs against Norges Bank Investment Management several years ago (RI coverage here and here).

STP had accused Credit Suisse of playing a leading financial role in the construction of DAPL, a charge denied by the bank’s then Chief Risk Officer Joachim Oechslin who said it had not given any money to the project financing of the Dakota pipeline. But he did say Credit Suisse had long-term relations with companies involved in DAPL.

The Swiss National Contact Point facilitated five meetings between Credit Suisse and STP. As a result Credit Suisse agreed to include the concept of ‘Free, Prior and Informed Consent (FPIC)’ with indigenous communities in its internal guidelines on project finance for the oil and gas, mining and forestry & agribusiness sectors.

Credit Suisse said in a statement: “Following conclusion of a constructive mediation process facilitated by the NCP, we are amending our respective sector policies to incorporate aspects regarding human rights and indigenous peoples even more specifically.“We take our responsibility towards all our stakeholders very seriously and appreciate an ongoing productive dialogue.”

“We note that Credit Suisse is limited its compliance with FPIC to project financing,” said Angela Mattli, campaign coordinator at STP. “Company financing and stock broking are excluded from these guidelines. The extension is therefore only a small step in the right direction when it comes to comprehensive protection of indigenous communities.”

DAPL is now complete but communities are still fighting, according to Michelle Cook, a lawyer focused on indigenous rights and founder of Divest, Invest, Protect – an indigenous-led campaign for the financial industry to cut ties with harmful extraction companies and projects.

“In particular, the company are proposing to double the amount of oil from 500,000 barrels a day to 1 million barrels. This increases the risk of contamination and strain on the infrastructure that currently exists,” she said.

The Standing Rock Sioux tribe is still involved in litigation regarding the pipeline, represented by Earth Justice.

On the recent NCP mediation, Cook said, as Credit Suisse did not provide project finance to the Dakota Access Pipeline, its new policy would do nothing to prevent abuses.

“These policies have to apply to corporate finance, as banks are all moving out of project finance, because it is much easier for them to get away with human rights abuses when they are funded through corporate finance.”

DAPL, controlled by Energy Transfer Partners cost $3.78bn, of which $2.5bn was financed by loans. The loans were provided by 17 banks, 13 of which are signatories to the Equator Principles, including: Citibank, Wells Fargo, BNP Paribas, SunTrust, Royal Bank of Scotland, ABN AMRO Capital, ING Bank, ICBC and Société Générale.

A number sold out of the loans after pressure, including ING and BNP Paribas.