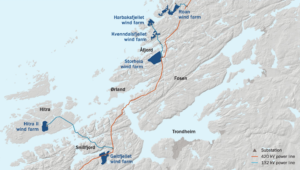 (Amends to say STP is considering its options, one of which is filing a complaint. Also includes comment from Credit Suisse.)

Swiss banking giant Credit Suisse is under fire for its financial involvement in Norway’s largest onshore wind project that campaigners say is a threat to the indigenous Sámi people and amounts to “green colonialism”.

The United Nations has already called on the Norwegian government to stop the ‘Fosen Vind’ project after it received complaints from Sámi reindeer herders, who fear the wind park will impact their winter pastures.

But Norway is still going ahead with the construction; scheduled to be completed in 2020.

Now Credit Suisse, which is co-financing Fosen Vind, is under scrutiny from the NGO Society for Threatened People (STP), which is considering its options, including possibly filing a complaint with the OECD human rights grievance system.

The Fosen Vind project comprises a total of six plants and is being built in Storheia, the main winter pasture area of a southern Sámi reindeer-herding community.

The Sámi people are the only recognised indigenous people in Europe, descendants of some of the very first people to enter the Scandinavian Peninsula more than 10,000 years ago. They live in a region called Sampi stretching from the west coast of Norway to Russia’s Kola Peninsula.

The Fosen Vind project would cause the Southern Sami people to lose some 44% of their winter pastures, says STP, which has advisory status at the United Nations Economic and Social Council.“The Southern Sámi people consider this another attempt by the government to acquire the Sampi land without the consent of the Sámi people,” says STP in a report. “The President of the Sámi Parliament, Aili Keskitalo, refers to this today as ‘green colonialism’.”

The Fosen Vind project is being financed by Statkraft, the Norwegian State Energy Company and Nordic Wind Power, a consortium of European investors founded by Credit Suisse Energy Infrastructure Partners.

The Southern Sámi Community along with STP are calling on Statkraft to halt the project and compensate for inconveniences and urging Nordic Wind Power to withdraw its investments.

And the STP is looking to file a complaint against Credit Suisse under the OECD human rights grievance system saying the project violates international agreements and human rights conventions.

STP already has a complaint pending against Credit Suisse at the OECD Swiss ‘National Contact Point’ concerning its business relations with companies involved with the controversial North Dakota Access Pipeline (DAPL) in the US.

Credit Suisse said: “The Fosen Vind project has undergone a rigorous approval process, including extensive consultations with the reindeer-herding South Sami community. In its role as a minority investor, Credit Suisse has reviewed this and the project’s compliance with all relevant Norwegian and international regulations.” The bank is a member of the Equator Principles and signed up to the Principles for Responsible Investment in 2014; the bank says it strives to “assume our responsibilities in the area of human rights in accordance with the International Bill of Human Rights, as well as the principles on human and labor rights set out in the UN Global Compact”.