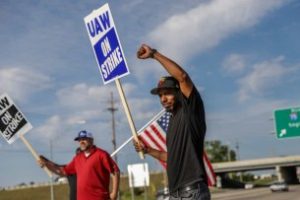 What’s good for General Motors is good for America, or so the saying goes. No surprise then that politicians on both sides have quickly annexed the current strike. Certainly, a lot of ‘hot button’ issues have been raised: corporate greed, healthcare, trade wars, and corruption. So what does the strike tell us about what’s going on in the States? The answer may be surprising – none of the above.
Some fifty thousand General Motors workers have walked out after talks between the United Auto Workers Union (the UAW) and the company broke down. The biggest private sector strike this decade. Wall Street yawned. The company is thought to be losing between $50m and $100 million a day, but set against sales of around $147 billion in 2018 that’s not very frightening. True, Moody’s warned GM debt might be downgraded to junk. Again. But the company has large stockpiles of inventory, and the US now accounts for only 28 per cent of its global workforce. GM now sells more cars in Asia than it does in the States.
The strikers themselves are not so lucky. Forced to survive on just $250 a week strike pay, and having their health benefits cut. One horror story told of the wife of a GM worker in Tennessee waking up after stomach surgery to be told the company had just withdrawn health cover and that she was now facing several thousands of dollars in medical bills. Healthcare is a major political issue in the States. Unsurprisingly, politicians are rushing to the picket lines. Not just the left-wing Presidential candidates Senators Bernie Sanders and Elizabeth Warren (dressed in union colours), but also moderates like Joe Biden and Senator Amy Klobacher. Democratic congresswoman Rashida Tlaib tweeted “GM… UAW workers… (bailed you out), and now that you can afford to provide healthcare and fair wages, you are abandoning them!”Even Donald Trump joined the party, seeking to portray the strike as a noble stand by the American worker against the company’s wicked transfer of jobs to Mexico.
There are problems with both sides’ narratives. For Republicans, it is true that the March mothballing of the Lordstown plant in Ohio and the manufacture of the Chevy Blazer in Mexico has wound US workers up. But GM points out it employs three times as many hourly workers in the U.S. as in Mexico (49,000 versus 16,000) and that it has invested $23 billion in America over the last ten years versus $5 billion in Mexico.
For Democrats, the attempt to portray the GM workers as downtrodden also has its limitations. True, the company has been employing more temporary workers, paid just $20 an hour (versus an average of $63). But they account for only seven per cent of the US workforce. And the other 93 per cent actually on strike are the elite of America’s blue collar workforce. With overtime and shift differentials, the average union worker at GM earns about $90,000 annually, and for each of the past four years has received a profit-sharing check of more than $10,000. In addition, GM workers enjoy a platinum healthcare scheme – exactly the kind at risk of being levelled down by Democrats’ universal healthcare proposals.
Indeed, some argue that well-paid workers have been goaded into the strike by the UAW attempting to cover up the rising tide of scandal engulfing the union itself. The number of officials indicted has risen suspiciously in line with louder calls for a strike. Prosecutors have outlined a shocking, corrupt system of payments bribing UAW officials (one bought a Ferrari – another paid off his $262,000 mortgage). In addition there’s a whole slate of separate charges about officials helping themselves to union funds, and charity accounts. One expensed a

$7,000 dinner (brimming with $1760 of Cristal champagne) along with his golf accessories.
Certainly, at first sight, the Union’s refusal to accept the company’s generous pay and benefits offer is confusing. But then consider this. The Company has offered to take the Lordstown plant out of mothballs. But instead of making cars, the workers there would be making electric batteries. And not quite yet. The demand simply isn’t there for quite a few years. The nature of this proposal perhaps indicates what is really going on: the convulsion of the autos sector as the world turns (slowly) against the combustion engine.
After years of strong growth, global auto sales were broadly flat in 2018. This was partly due to a slowdown in China, now by far the biggest market for cars (24 million sold last year compared to just 17 million in the States). But industry analysts point to other broader consumer trends. Two economists, Janet Harvey and James Pomeroy at HSBC, argue that “car demand is in decline due to a greater focus on environmental policies, increased urbanization and investment in alternatives — be it on-demand cars or public transport.” It’s not just tougher emissions standards (the EU’s 2021 enforcements are thought to add a $1,000 to the cost of a car), but something bigger.
Two recent UK studies illustrate the direction of travel. John Polak and Scott Le Vine of Imperial College found that 37 per cent of DriveNow car-share users decided not to buy a car and a further 17 per cent said they had sold their private car or intended to in the next three months.Likewise, a YouGov survey commissioned by Uber, found that 43 per cent of Londoners believe ride sharing apps offer a genuine alternative to owning a car. And 22 per cent who own a car would consider not owning one in the future if ride-sharing apps became easier. It’s an industry-financed survey, but a point London Mayor, Sadiq Khan, should probably take on board.
Then there’s the huge disruption posed by electric cars. It has been estimated that the industry will need to invest $400 billion over the next five years, making enormous changes in working practices and supplier networks. Battery-powered cars have far fewer parts, endangering suppliers of valves, pistons and other parts in conventional engines. Eight million people work in the autos industry worldwide, and many times that in suppliers. Some surprising countries (like Germany) could be facing mass unemployment.
So here’s the nub of it. As GM’s CEO Mary Barra herself notes, autos have an “all-electric future.” The consumer can see that too, but electric vehicle pricing has yet to come down to the right level. While global sales of battery electric cars surged 73 per cent in 2018 to 1.3 million units, that was still just a fraction of the 86 million cars sold overall. GM loses thousands on each Chevy Bolt electric car it sells. This is what the current strike is all about. Bridging the gap between the combustion ‘now’ and the electric ‘future.’ Auto workers join the growing line of tech victims.