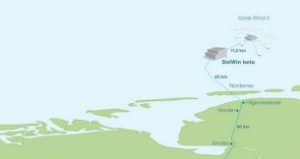 A consortium of four Danish pension funds has reached a deal with Danish energy firm DONG to pay DKK4.5bn (€600m) for a 50% equity stake in a German offshore wind park to be constructed and operated by DONG. The four Danish schemes are Pensionskassernes Administration (PKA), Industriens Pension, Lærernes Pension and Lægernes Pensionskasse. PKA is the biggest investor of the group, paying close to €300m for 24.75% of the park, known as “Gode Wind 2.” Industriens Pension will take a 10.5% stake in the park, followed by Lærernes Pension (8.75%) and Lægernes Pensionskasse (6%). The purchase comes at a time of busy financing of renewables infrastructure projects by large pension funds. Earlier this week, RI reported that Dutch pension fund asset manager APG had committed €250m to a new private equity fund that will invest in existing and new hydropower plants across Europe. At the same time, Canada’s pensions giant, La Caisse de dépot et placement du Québec, which manages C$200.1bn (€136.8bn) in assets from mainly public pension plans, said it had acquired a 24.7% stake in Invenergy Wind, a developer of renewable projects.
Construction of Gode Wind 2, located 45 kilometres from the German coast in the North Sea, is expected to begin in 2015 and end in 2016. Once on stream, the wind park will have a capacity of 252 MW, which, according to DONG, is enough power to supply around 260,000 households.Gode Wind 2 marks PKA’s fourth investment in offshore wind parks. The others are Gemini, a 600MW Dutch offshore park; Anholt, a 400MW Danish facility that is on stream; and Butendiek, another German wind park in the North Sea that will generate up to 288MW of power once completed.
PKA Chief Executive Peter Damgaard Jensen said that following Gode Wind 2, his scheme would continue to make such investments, “since they are in line with the wish for a sustainable return and our members’ demand to make a positive impact on the climate.” A pension administrator, PKA looks after DKK195.3bn in assets for five funds from Denmark’s health care and social services sectors. It has around 260,000 beneficiaries, 90% of whom are women. DONG is building a total of three “Gode Wind” parks after acquiring the rights to develop them from PNE, a German firm, for €157m two years ago. “Gode Wind 1,” a 330MW facility, is already under construction and, like Gode Wind 2, should begin generating power in 2016. By 2020, DONG aims to triple its offshore wind capacity from 2.2GW currently. According to the firm, the deal with the Danish schemes “enables us to free up capital to continue our investment programme, thereby assisting us in reaching that target.”