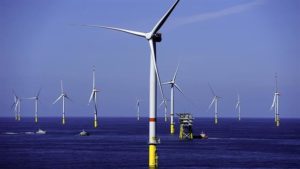 Developer DONG Energy said the Gode Wind 1 and 2 offshore wind farms were launched at the Danish Embassy in Berlin.

With 97 wind turbines and a total capacity of 582MW, the two facilities off the north German coast generate enough power to supply around 600,000 German households annually.

DONG owns 50% of both Gode Wind 1 and 2. In addition, the infrastructure fund Global Infrastructure Partners owns a 50% share in Gode Wind 1. Talanx, the third-largest German insurance group, also holds an indirect interest. Four Danish pension funds, including PKA and Industriens Pension, have a total holding of 50% in Gode Wind 2.

Samuel Leupold, CEO of Wind Power at DONG, said: “The wind turbines at Gode Wind 1 and 2 are already generating clean power off the coast of Norddeich, and our next German offshore wind farm, Borkum Riffgrund 2, is well underway.“These large-scale projects are testament that offshore wind has become a reliable, predictable and cost effective technology which will contribute significantly to Germany’s energy transition.”

The opening ceremony will also include a panel discussion on the European energy transition featuring German and Danish politicians.

Planning for the wind farms began with the final investment decision in 2013; construction began in 2015.

Dong, in which Danish funds ATP and PFA Pension are significant investors, last month agreed to sell its upstream oil and gas business to British petrochemicals group Ineos in deal worth more than $1.1bn. It was the latest move as the former state-owned oil and gas company transforms into a renewable energy player. Link