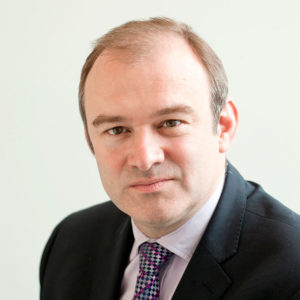 Sir Ed Davey, the UK’s former Secretary of State for Energy and Climate Change, has spoken in strong terms about the new government’s decision to merge his former department into a wider business ministry – saying the “downgrade” will send a signal to international investors that the country has “given up” on climate change.

He said the Conservative government under previous Prime Minister David Cameron has made a series of “non-rational decisions since 2015” that are “making the energy transition almost impossible”.

Speaking at an event organized by UKSIF, the UK Sustainable Investment and Finance Association, he added: “I am staggered by the extent of uncertainty facing investors – and that’s even before Boris has said anything!” He was referring to the gaffe-prone new Foreign Secretary Boris Johnson.

Davey said: “It’s in the name, you are downgraded. International investors will say the UK has given up on climate change.” On top of this, new Prime Minister Theresa May has appointed Andrea Leadsom, whose voting record in Parliament shows opposition to climate change regulation, as environment minister.Davey, one of the senior Liberal Democrats in the former coalition government, said his colleague Vince Cable as Business Secretary had done valuable work on fiduciary duty, corporate reporting, and stewardship. Cable had commissioned the Kay Review.

“I am staggered by the extent of uncertainty facing investors”

But he said he “remains to be convinced” about May’s plans for corporate governance reforms. Davey said of binding votes on pay that executives would still be able to bypass this somehow. And as for workers on boards, he prefers greater employee share ownership.

Meanwhile, other government appointments which have raised eyebrows include the Minister for Civil Society Rob Wilson, who oversees social investment, being moved to the Department for Culture, Media and Sport. Trade body Social Enterprise UK called it “a curious move with potentially serious consequences for our sector’s future”.

And Ros Altmann, the pensions industry expert who was Minister of State for pensions, was replaced by Richard Harrington – with the more junior title of Undersecretary of State. She hit out, saying: “It would seem that the role of Pensions Minister is being downgraded by the new Government.”