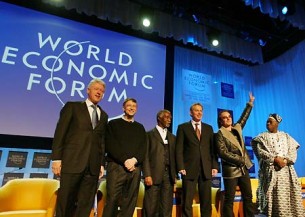 From a sustainable investment perspective, this year’s World Economic Forum (WEF) in Davos, Switzerland was more remarkable for what was not discussed – at least in public session – than for what was. In all fairness, the WEF did coincide perfectly with three spectacular and virtually simultaneous diversionary events in the global financial world: widespread and vertiginous drops in virtually all of the developed world equity markets; the bailing out of several major global banks by sovereign wealth funds from the Gulf and Asia; and Société Générale’s spectacular $7bn loss, ostensibly at the hands of a single rogue trader. Understandably, all three events created a major distraction from the formal agenda and dominated corridor and cocktail party conversations. Not that sustainability themes were entirely absent from the WEF, however. Al Gore and Bono (covering climate change and global poverty, respectively) headlined a breakfast with the somewhat breathless title of: “A Unified Earth Theory: Combining Solutions to Extreme Poverty.” Unfortunately for readers of this magazine, however, virtually all of the emphasis was on government, regulation, and corporates, with the current and potential role of investors virtually absent.Given the overall WEF theme of “The Power of Collaborative Innovation”, I found this particularly odd. A speech or two from representatives of the largest investor collaboration in history, the $40 trillion Carbon Disclosure Project, would not have been amiss.
Global water issues also got their fifteen minutes in the sun. UN Secretary General Ban Ki-Moon and the CEO’s of Pepsi, Nestle, and Dow Chemicals all played a useful role in highlighting both the scale and strategic importance of the challenge. Most importantly, so did actor Matt Damon, whose personal foundation is contributing to some promising clean water initiatives in sub-Saharan Africa. PepsiCo gave the term “Pepsi Challenge” a new and socially productive twist by announcing an $8 grant for clean water initiatives. The grant will be shared by Columbia University’s Earth Institute and Matt Damon’s charity, H20 Africa.
My personal favorite at the WEF, however, was Bill Gates’ highly publicized speech proposing what amounts to a new world order which he called “creative capitalism.” Apparently it’s now conceivable that the private sector could possibly be engaged in helping tackle global sustainability problems – and make a profit in the

bargain. Who could have guessed? What a novel idea! I would argue that Mr. Gates has been beaten to the punch on this by innumerable previous initiatives, including the Global Compact, the UN Principles for Responsible Investment, the Access to Medicines Index, the Base of the Pyramid Index, and literally dozens of other, similar initiatives around the world with which he seems to have little or no familiarity. Be that as it may; the real tragedy of Mr. Gates’ remarks is the fact that his own personal family foundation has over $33bn in assets, and he has already explicitly dismissed the idea that any of it could be reviewed for negative social or environmental impacts, quite apart from using it as a catalyst for positive change. (I make an enormous distinction here between the investment of foundation’s principal or corpus on the one hand and its stellar grantmaking activities on the other – typically 5% of the former. Unfortunately, the foundation – and virtually all of its peer group – make precisely the same distinction – to a fault. The two halves of the organization are, literally, two solitudes.) The empirical stock market evidence suggests that this lack of incorporating ESG insights and research into their investment strategies may well be causing foundations to leave risk-adjusted financial returns on the table.What may be even worse, they are also leaving positive program impact on the table as well. Apparently, old investment habits die hard.
Sovereign wealth funds were, of course, another major topic of discussion, at Davos, in both public and private sessions. Once again, however, no one joined up the dots and acknowledged that the funds could improve both their financial returns and their image by adopting responsible investment strategies, and thereby possibly defuse or preempt the deep suspicion with which many of them are currently viewed in the West.
In short, sustainability concerns seemed to me to get somewhat shorter shrift at Davos this year than last. Perhaps that means that global conditions are improving faster than I thought, and further discussion is unnecessary.
At the risk of sounding excessively curmudgeonly, I will close with a wonderful quote from Professor Henry Mintzberg, one of the world’s leading business strategy and management gurus: “Davos is the place where the same bunch who spend 51 weeks a year creating all these problems join with the rest of us to spend one week trying to figure out how to solve them.”
Dr. Matthew Kiernan is founder & chief executive of Innovest Strategic Value Advisors