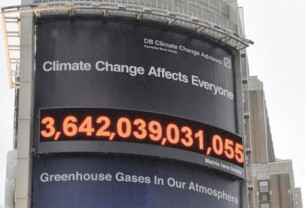 Deutsche Asset Management (DeAM), has quietly disbanded its New York-based in-house environmental research and investment division, DB Climate Change Advisors, in a clear sign that the downturn in green investing is biting into fund management resources in the sector. Sources close to Deutsche said the closure of DB Climate Change Advisors had led to seven redundancies worldwide, including Mark Fulton, Global Head of Climate Change Investment Research, and Bruce Kahn, Director and Senior Investment Analyst, both based out of DeAM’s New York office. The disbanding of its respected climate change research team, which made much of its work publicly available as an educational spur to investors, has not been officially announced by Deutsche. The DB Climate Change Advisors website is still available and showing the real-time carbon counter of greenhouse gases in the atmosphere that Deutsche had placed on a 70-foot-tall digital billboard in downtown New York: Link The Carbon Counter and related “Know the Number” campaign were part of a climate-change awareness and education initiative sponsored by DB Climate Change Advisors. The division was the brainchild of Kevin Parker, DeAM’s former Head of Asset Management, who stepped down from the positionin May this year. Parker was replaced by Michele Faissola, an investment banker like Parker, and Deutsche’s former Head of Rates, who has now assumed responsibility for both asset and wealth management at DeAM. Around the same time, Deutsche Bank called off plans to sell most of its asset management businesses to Guggenheim Partners, the private US asset manager, which runs the investments of the Guggenheim family and foundation.
Deutsche was a rarity amongst large asset managers when it took up the climate theme in a big way in 2005, mostly at Parker’s behest.
Speaking to RI in March 2011, Parker was bullish about the potential for climate change investment at DeAM, which he said at that time was running $12 billion in assets on the climate change theme: Link to article
Ironically, the then DeAM chief noted that the US government had predicted the New York State area could be hit by greater precipitation and flash flooding as a result of climate change.
The Deutsche sources said the asset manager remained committed to sustainability and that the fund manager was still running significant energy and climate change strategies for investors.