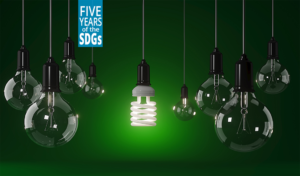 One of the world’s leading energy forecasters, DNV GL, recently released its annual Energy Transition Outlook, with a view on energy supply and demand up to 2050. It concludes that growth in and increasing affordability of solar, wind and electric vehicles in combination with the impact of COVID makes 2019 the year of peak demand for fossil fuels.

Most governments around the world are ignoring these trend lines. In the scramble to recover from the economic impacts of the pandemic, they are dumping stimulus dollars into the fossil fuel sector regardless of it having been in financial decline for years with staggering mounds of debt and jobs drying up despite trillions in government subsidies.

With unprecedented levels of public investment going into recovery, this is a wasted opportunity to direct investments to an equitable transition from fossil fuels to clean energy and other low-carbon, sustainable solutions.

The reality of climate change is also being ignored. Fossil fuels are largely responsible for the climate emergency, with 75% of greenhouse gas emissions to date coming from oil, gas, and coal. Existing fossil fuel capacity will result in emissions that will take the world well past the limit of 1.5°C of global temperature rise. Despite this stark reality, national governments had plans to allow the fossil-fuel sector to expand to the point proposed projects would lock in 120% more emissions than what is consistent with 1.5°C.

How did we get here?

In the realm of public policy, fossil fuel expansion plans have not been taken into consideration. The existing UN Climate Change Convention has very few mechanisms to account for or address the continued expansion of the production of fossil fuels. On one hand, governments wave emissions reduction targets at the main climate negotiating meeting, the Conference of the Parties, while on the other they simultaneously hand out new fossil-fuel exploration plans and production agreements.

No one is adding up the risk.

Publicly accessible, systematically reported and comparable data on fossil fuel production, reserves and resources does not exist. This missing baseline of fossil fuels that are known, estimated and planned for extraction is critical for assessing the emissions these projects lock-in against the trajectory of climate ambition needed to stay within the safe temperature goal of 1.5°C. Without it, governments, investors and citizens are limited in their capacity to hold industry accountable for carbon pollution from the supply of fossil fuels and determine an equitable path to low-carbon energy.

A more ambitious international effort is needed to address this production gap and ensure COVID-19 recovery efforts increase resilience to major shocks and stresses, rather than lock in the unjust, unsustainable practices of the past. No country or community can spark an equitable energy transition on its own, and this is particularly true of those that are overly reliant on fossil fuels or that bear major debt loads.

We need a new path forward

US Vice Presidential candidate Kamala Harris recognised this in her climate platform when vying for the top job, calling for “the first-ever global negotiation of the cooperative managed decline of fossil fuel production”.

Now a team of climate, policy and legal experts from around the world is proposing a Fossil Fuel Non-Proliferation Treaty, to be developed along with a strengthened Paris Accord.

The three pillars of the 1968 Nuclear Non-Proliferation Treaty⁠ – non-proliferation, global disarmament, and peaceful transition⁠ – provide a framework for the creation of the new fossil-fuel treaty.

A movement to advance a Fossil Fuel Non-Proliferation Treaty can advance the conversation regarding the science-based need to wind down production and provide the missing mechanism for global cooperation on an equitable transition.

The treaty would increase transparency and accountability by exposing national governments, companies, and investors driving the climate emergency through the creation of a Global Registry of Fossil Fuels that would track emissions from current and proposed projects. This registry would be a record of potential emissions from projects still in the planning stages, a schedule of so-called “unburnable carbon” that should be kept underground. The registry would link fossil fuels to supply and to the companies and people that benefit along the way. A request for proposals to build a registry has been released with the aim to complete a prototype by mid 2021.

In addition, an Oil Exit List also under development would highlight companies and investors moving out of fossil fuels, a change that would bring enormous benefit to the global economy. Carbon Tracker earlier this year estimated that coal developers risk wasting more than $600bn because it is already cheaper, in all major markets, to generate electricity from new renewables than from new coal plants. And in the oil and gas sectors, there is a very similar picture of potentially wasted capital and unneeded projects.

As the world works to respond to the global health pandemic over the coming months, the aim should be “better than normal” rather than “back to normal”.  Normal just wasn’t good enough. It’s going to take transformative ideas like the Fossil Fuel Non-Proliferation Treaty to generate the resilience, equity, and new opportunities the world so desperately needs right now.

Investors have a critical role to play. Endorsing the Fossil Fuel Non-Proliferation Treaty Initiative, calling for a Global Registry of Fossil Fuels and joining the front runners on the Oil Exit List  sends strong signals to national and international government bodies that phasing out fossil fuel production and accelerating an equitable energy transition is an imperative that refuses to be ignored.

Tzeporah Berman is an Adjunct Professor of Environmental Studies at York University in Toronto, Chair of the Fossil Fuel Non-Proliferation Treaty Initiative and International Programme Director at Stand.Earth