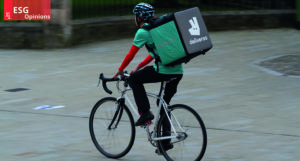 The Deliveroo IPO at the end of March has been described as “one of the most disastrous IPOs in memory.”

Fraser Thorne, CEO of The Edison Group, the investment research house, said: “the warning signs were there. It’s a dog’s dinner…a case study of how not to do an IPO.”

Significantly, it was also one of the first floats to be hit by an effective sustainability boycott, as a raft of large UK asset managers weighed in to say they would not invest in the IPO because of ESG risks as well as pricing.

These claims for the ineptitude, pricing and ESG risks of the Deliveroo IPO merit examination.

The Background to the IPO

The Deliveroo IPO was the biggest Initial Public Offering on the London Stock Exchange since Glencore in 2011. The company was advised by some of the finest banks and law firms.

The bookrunners who ran the IPO were Goldman Sachs and J. P. Morgan. The lawyers providing advice on the legal and regulatory risks and requirements of the London Stock Exchange (LSE) were Magic Circle law firm Freshfields Bruckhaus and Deringer, and the global, US-based law firm Latham & Watkins.

What could possibly go wrong?

Remarkably – and bucking the market trend for fast food takeaway deliveries during the pandemic – Deliveroo made a loss of £224m in 2020. Notwithstanding the loss, at the outset the bookrunners, Goldman Sachs and J. P. Morgan Cazenove, were reported to have put a prospective price of £8.8bn on the company. A $7.6bn flotation on the LSE was finally agreed, albeit following the criticism from UK fund managers, which knocked more than a billion pounds off the indicative valuation.

Indeed, investors then “blew a giant raspberry” at the float.

The 390p share price fell like a stone. At one point during conditional trading it fell by as much as 30%, wiping £2bn from its flotation value. At the end of the first day of trading the share price was down 26% (287.45p per share). The company’s value was reduced on paper to £5.2bn.

Later it emerged that, with hindsight, a number of investors were unhappy the float took place at the end of the quarter, 31 March, which is typically a bad time to do an IPO. The problem, however, with that analysis is that it wasn’t just bad timing that rocked the IPO.

By April 7, Deliveroo shares were still stuck at about 25% below their float price of 390p. They have yet to recover. Their value might have plumbed new depths had Goldman Sachs, according to the Financial Times, not spent £75m (there goes our fees) on propping up the share price. According to the FT report, the profits made by Goldman Sachs in supporting the IPO profits were to be surrendered to Deliveroo “as part of an agreement between the two companies which was not disclosed in the company’s IPO prospectus,” according to people with direct knowledge of the matter. Goldman Sachs and Deliveroo declined to comment to the FT.

Looking at the ESG risks: The Deliveroo IPO prospectus

On Page 9 of its March 2021 IPO Prospectus, Deliveroo stated in bold italics that its “business would be adversely affected if our rider model or approach to rider status of our operating practices were successfully challenged or if changes in law require us to reclassify our riders as employees.”

The IPO Prospectus then outlined that Deliveroo is in legal proceedings in a number of countries “including the United Kingdom, France, Spain, the Netherlands and Italy” on a number of grounds relating to the status of its riders, and that the company has made provision or provided for contingent liabilities for Australia, the Netherlands, Spain and Italy in the Historic Financial Information for the year ended 31 December 2020.

Deliveroo also underlined that if judicial decisions and government regulation went against it the financial model and the company’s reputation would be adversely impacted. On page 122, the legal provision is stated to be £112.2m. This is a huge increase from the £4.4m reserved as legal contingency costs in 2018 and £32m in 2019. There is a note in the Prospectus as to how this was calculated. But it is difficult to understand exactly how the sum was arrived at, particularly as Uber Eats, Glovo, Just Eat and Deliveroo were ordered to treat couriers as employees and pay a €733m fine within 90 days if they wished to avoid criminal prosecution by the Italian regulators alone.

The UK Supreme Court also declared recently that Uber drivers are workers. Moreover, in February 2021 the Amsterdam Appeals Court found against Deliveroo in a decision stating that its delivery workers were employees and not freelancers. Deliveroo is appealing the decision to the Dutch Supreme Court, but it is by no means certain the appeal will be successful, and provision should be made for an adverse outcome.

ShareAction held a virtual conference with 27 asset managers, Deliveroo riders and the IWGB trade union on 25th March. Following the meeting, Eden Tree Investment Management said the economic model deployed by companies like Deliveroo was “best characterised as a race to the bottom with employees in the main treated as disposable assets – which is the very antithesis of a sustainable business model.”

The fund managers’ concerns were not just about ESG but an accumulation of issues.

One major governance concern was Deliveroo’s co-founder, Will Shu, retaining voting control despite owning a minority stake, via a Silicon Valley-style, dual-share structure.

LGIM, the UK’s biggest fund manager, said it was pushing the UK regulator, the Financial Conduct Authority, to ensure Deliveroo is not included in premium indices, which could force it to invest in the company through its passive business: “It is important to protect minority and end-investors against potential poor management that could lead to value destruction and avoidable investor loss,” LGIM said.

From a competition perspective, there were also investor worries about rival companies such as Just Eat, which does ‘employ’ its delivery staff, eating into Deliveroo’s profits

There was also speculation that the ending of the pandemic would have a significant impact on Deliveroo’s profitability as the demand for takeaway food is displaced by clients exercising their renewed freedom to dine out.

On the “S” in ESG considerations there were 3 main issues which exercised the asset managers to differing degrees: (1) the legal, litigation and regulatory risks around the status of Deliveroo riders; (2) the safety and welfare of the Deliveroo delivery riders; and (3) the human rights of those riders and their entitlement to the minimum wage or the living wage.

This is, of course, a global issue. Deliveroo has 50,000 riders in the UK, but 100,000 riders worldwide. Peer firms such as Uber and Lyft are spending millions in legal fees and costs and lobby consultant fees to ensure that workers are classified as independent contractors rather than employees with the attendant benefits in terms of contracts of employment, job security and entitlement to pensions, holiday pay and sickness benefits which the status of employee entails. New Zealand outlawed zero hour contracts in 2016.

However, it is supported in a number of legal jurisdictions and US states. In California, for example, gig economy companies spent $200m to obtain exemption from “an existential threat to their business models” posed by a new labour law which would have required them to treat their workers as employees.

In the UK, Pimlico Plumbers lost its claim in the UK Supreme Court that a plumber was not a ‘worker’ and therefore not entitled holiday pay and other basic workers’ rights. Uber drivers have been held by the UK Supreme Court to be “workers” and therefore entitled to benefits: holidays, sickness pay, pension entitlement and collective bargaining rights. On the other hand, the status of Deliveroo riders and delivery staff as contractors was upheld by the High Court. That said, Deliveroo uses an algorithm to push riders and drivers to maximum performance, and the company has experienced strikes over working conditions and low pay, which is a risk both to Deliveroo and its investors.

Low pay is also a recurring theme. A report by the Bureau of Investigative Journalism and the Independent Workers of Great Britain (IWGB) recorded a Deliveroo driver being paid about £2 per hour, a small fraction of the UK minimum wage. This may be an outlier but there is conflicting evidence on low pay which needs to be addressed fully.

Professor Paul Watchman is with The Blended Capital Group

Dr. Martin Buttle is Head of Good Work at ShareAction