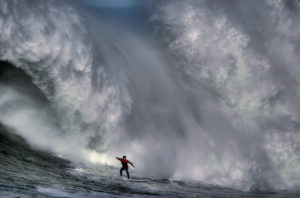 The PRI in Person conference in September in Paris was a great success. Never have so many people attended. At the same time, we know that time is running out. There is a huge gap between what is necessary to have a chance to maintain the rise in average temperatures at “well below 2 degrees” and what is actually being done. In that respect, one can only wonder what financial markets are waiting for to adequately price near-term policy response to climate change?
The procrastination is very dangerous, since the question for investors now is not if governments will act, but when they will do so, and what policies they will use and where the impact will be felt. It is the reason why the PRI, in collaboration with Vivid Economics and Energy Transition Advisors, launched the Inevitable Policy Response (IPR).
The IPR project forecasts a market response by 2025 to the inevitable climate policies that will be implemented, and which will be abrupt, forceful and disorderly because of the delay.
The packed PRI in Person session dedicated to the IPR (Preparing financial markets for climate related policy and regulatory risks) was an encouraging sign that most players are starting to get to grip with an incoming revaluation of assets. The landing is likely to be bumpy….
Another way to look at the issue is to acknowledge that if debt in its different forms has put our world in a very unstable and dangerous situation, long term investors should seize the opportunities linked to the financing of the transition. Indeed, the management of downside risk can only partially save investors from portfolio-wide losses; maximising the upside opportunities is equally critical.
Debt in its different forms has put our world in a very unstable and dangerous situation. We are well aware now that growth has for much too long been boosted by over-leveraging the economy through credit. With the GFC (global financial crisis) debt migrated from households’ balance sheet to banks’ then to states and now to central banks. In most countries public debt has not been this high since World War 2.
The ageing of the population is now increasing the cost of retirement benefits and health coverage. Many pension funds are underfunded and social security in some countries is “financed” at least partially on credit.
Those two different kinds of debt are worrying but they are still manageable. Given that someone’s debt is someone else’s asset, sooner or later, once the balance of power favours debtors, there will inevitably be a restructuring of some sort. In some way, the unique experiment of QE is already extracting from savers a tax that will make them shout louder and louder.
But actually, it is our ecological debt that should convince every investor that it’s time for a change. Biodiversity has already been damaged and CO² concentration has reached a level not seen since the preindustrial age. And that kind of debt cannot be rescheduled. The CO² already released in the atmosphere will stay there for a long, long time and with a highly likely overshoot we will see decades of negative emissions technologies required to redress the balance.The policy response is inevitable because it is increasingly obvious that the financial system is on artificial support with central banks doing whatever they can to shore up economies based on a doomed paradigm. It is clear that we must get rid of the old model: “extract, produce, dispose” and that the mass consumption we have become used to cannot be extended further. One planet is already not enough and there is no Planet B. The day that markets recognise this, along with the associated government reaction, will see many companies go abruptly out of business. Consider what happened to giant electricity producers in countries like Germany when their governments decided to announce it would close down nuclear power plants…
Whilst we know what financial model we must discard, it is equally important to promote a circular and sustainable economy, one that can already count on a wide array of existing technologies. Project Drawdown is a global research organization that identifies, reviews, and analyses the most viable solutions to climate change, and shares these findings publicly: Link to Project Drawdown
Beyond these solutions, the SDGs propose the actions to be implemented to reach sustainable growth.
What we need now is to harness the energy that empowers people. We are the first generation to observe the impacts of climate change. And young people are taking to the streets because they cannot accept that we keep on doing the same thing but hoping for a different result.
We know that markets will stay dysfunctional as long as there is no tax on carbon, no direct emissions regulations, nor the signals of those policies. The absurd subsidies given to fossil fuels should be suppressed as soon as possible.
Central banks that have done much for bank stability since 2008 should now contribute to the reassessment of long-term investors’ prudential regulation, and especially that of pension funds. Why maintain rules that lead pension funds to do economic ‘transformation’ in reverse by taking very long-term and patient capital to invest in much shorter-term assets? Considering that in the eurozone almost all core countries’ sovereign bonds are offering negative returns, this is economic and financial suicide!
The Climate Endowment that I am an advisor to aims at “importing” into Europe the endowment model that has been successful for great universities like Harvard or Yale. It is an investment vehicle to invest in infrastructure and other ventures linked to the transition towards a more sustainable and less carbon intensive economy.
The old 60/40 asset allocation model cannot work, and it is difficult to forecast when sovereign bonds will deliver real return. The inevitable policy response means that a significant portion of institutional investors’ assets might become stranded. It is now time to innovate and to implement the endowment approach on a massive scale and take advantage of the transition.

Philippe Desfossés is the former CEO of the €33bn ERAFP pension fund in Paris, France.