Responsible Investor
Home News & Analysis Governance International Women’s Day: Does it matter if only a handful of women...
Return to search
Hot Topics 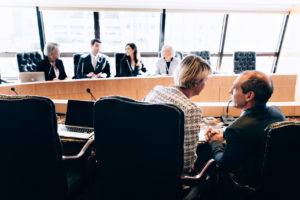 It is worth remembering why International Women's Day (IWD) is commemorated. Its origins are related to the working class struggles to overcome Dickensian labour conditions. The burden was double if you were a woman: “the proletarian of the proletariat”, in the words of the 19th century feminist Flora Tristan.

More than a century after the first IWD demonstrations, one takes for granted both labour rights and gender equality, making celebrations like IWD or Labour Day redundant.

Never mind the precarious conditions that many workers still face, periodically emphasised by a dramatic event – COVID-19 being the latest. Let’s just take a closer look at the top of the workforce and corporate food chains.

Only five women chair boards of the FTSE 100, according to the latest findings of the UK Government-sponsored Hampton-Alexander Review (although the number is set to rise to seven, according to more recent figures from the 30% Club).

The Review is the penultimate and fourth report of an initiative that in 2016 set the target of achieving by 2020 at least 33% of women in leadership positions at the FTSE 350 – not only at boardroom level, but also for executive committees and direct reports.

The Review found the most optimistic results for FTSE 100 boards, where the target could possibly be within reach ahead of the deadline. The FTSE 250 also improved, with 111 boards having met the 33% target.

And, when both indexes are considered, the tokenistic practice of “One & Done” boards, as the Review calls those with just one female director, has gone down from 74 to 39 this year for the FTSE 350.

“Why do PLCs think they are doing a good job in managing talent with such a huge imbalance at the top? If you are mismanaging the human resource so badly, what else are you mismanaging in your organisation?” – Professor Ruth Sealy

In perspective, and taking into account the data of the Hampton-Alexander predecessor, the Lord Davies Review, there has been significant progress.

The Review is less optimistic when it comes to other areas, such as executive committees and direct reports, which are often considered the pipeline of talent. The results are 28.6% for the FTSE 100 and 27.9% for the FTSE 250.

When it comes to executive committees and direct reports, too many companies remain well adrift of the 33% target. Unless half of all available roles go to women, the FTSE 350 will not achieve the target by the end of 2020, the Review found.

The low number of female CEOs – just six for the FTSE 100 (down to five, according to the 30% Club) – is often criticised. But sometimes observers overlook the fact that, in good governance terms, who leads the board should be even more important.

Perhaps that is a consequence of the still pervasive practice in the US of combining both roles (and in other countries where executive power remains above oversight through different practices).

At a recent lecture in the UK, governance expert Jon Lukomnik highlighted “CEO primacy”, when the words “imperial CEOs” reflects their unchallenged status. “Even directors, to whom we turn today as the ultimate fiduciaries of the company, were not empowered,” he continued, citing Harvard Professor Myles Mace, who famously called them “ornaments on a Christmas tree”.

As the UK Financial Reporting Council’s Corporate Governance Code establishes, not only does the chair lead the board and take responsibility for its overall effectiveness in directing the company, the chair also ensures that the views of shareholders and stakeholders are understood.

So, empowerment of directors and diversity of the board might be two sides of the same coin. But it was only recently that a subtle change made it into the FRC’s Code, as Deborah Gilshan, an independent advisor on investment stewardship and ESG, tells RI.

“Organisations have been designed by men for men; and specifically for men with a wife at home” – Rowena Ironside.

Gilshan, founder of networking female association The 100% Club, points out that in 2018 the Governance Code adopted the gender neutral term of chair (instead of chairman).

“That might sound inconsequential, but words and the images that they convey really do matter,” says Gilshan.

Providing cover for this nomenclature, it has sometimes been argued that the word chairman is not necessarily sexist: that, etymologically, it comes from the Latin word ‘manus’ meaning hand, thus relevant to whoever holds the chair, regardless of the gender.

Juan José García González, Associate Professor of Classic Languages at Oviedo University, tells RI that such an explanation is artificial and improbable. Compound words with the second element ‘man’ are very common in Germanic languages, he says. “It means the man of higher status who sits down while the rest remain standing.”

Rowena Ironside, Chair of Women on Boards UK (a membership organisation whose aim is to support women to access board positions), tells RI that patriarchy is one of the historical drivers behind the lack of gender diversity at the top of all types of organisation.

Historically, women were excluded from higher education and leadership positions, Ironside says. “We’re not talking that long ago — this was still occurring in my lifetime. Organisations have been designed by men for men; and specifically for men with a wife at home.”

Gilshan, who is also Chair of the Ethics & Systemic Risk Committee at the International Corporate Governance Network, says the best candidate for the role is the one who should always be appointed.

“But I don’t think it is credible that men are always the best candidates for these roles. We have to ensure that there is a very diverse shortlist when candidates are put forward.”

She adds: “The appointment of Baroness Vadera at Prudential is a strong signal. She was not serving on the board.” Vadera joined the insurer in January, from Santander UK, where she was the chair of the board.

Ruth Sealy, Associate Professor of Organisation Studies, Director of Impact at the University of Exeter’s Business School, has recently been studying the board composition of NHS trusts, operational units of the UK’s National Health Service.

She tells RI that these trusts are very large and complex organisations, similar to some of the FTSE constituents. Yet the percentages of women in top positions at the trusts tell a different story: about 30% and 40% for chairs and CEOs, respectively.

Sealy says that’s a very interesting comparison, and from her interviews with NHS trust chairs, she draws three clear messages that explain such enhanced gender diversity.

First, legitimacy in the representation, which takes into account the community they serve and also the workforce, of which three-quarters are female; second, talent management; and third, board effectiveness.

Sealy says: “If you have 50/50 coming in at the bottom of your pipeline, why do PLCs think they are doing a good job in managing talent with such a huge imbalance at the top? If you are mismanaging the human resource so badly, what else are you mismanaging in your organisation?”

The growing number of institutional investors that have pledged to vote against companies failing to meet the Hampton-Alexander board expectations will still have a considerable pool of laggards this AGM season.

Without counting those between 33% and 30% (assuming they are on the right track), there are still 30 companies in the FTSE 100 and 126 in the FTSE 250 that fall short of requirements. Among them are Lloyds Banking Group, National Grid, Glencore, Coca-Cola HBC AG and Centrica. Rio Tinto is the worst performer of the FTSE 100, with 11%.

Approached by RI, the five chairwomen of the FTSE 100 boards were not available for comment