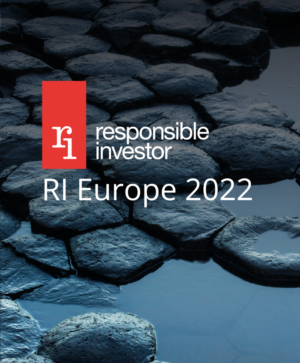 Our flagship event, RI Europe, was back in person in London June 14-15 for the first time since 2019. An impressive speaker lineup and strong support from the rest of the sustainable finance community – a big thank you to all who attended – made for a series of stimulating discussions on both days of the conference. Here are five talking points that caught the attention of the editorial team:

The FCA’s Mark Manning suggested that the double materiality approach to disclosure favoured by the EU, which takes into account the social and environmental impact of a company, is unnecessary. “It is plainly not the case that we will miss a corporate’s external sustainability impacts if a double materiality lens is not applied,” he said. Manning, who leads the UK regulator’s policy work on sustainable finance and stewardship, said the conventional approach of focusing on company enterprise value would be sufficient to capture all factors relevant to investor decision-making as long as they were material.

Kris Nathanail-Brighton, from global regulatory body IOSCO, warned asset managers not to take commercial ESG data at face value. “It is not enough to blame any cases of greenwashing on an external data provider,” she said. “Investors must conduct their own due diligence on this.” This is an area on which regulators will likely focus, she added. Responsible Investor has reported on instances where asset managers such as Northern Trust and JPMorgan have blamed exposures to harmful environmental and social activities in ESG funds on external suppliers of ESG data.

Lois Guthrie, a senior adviser at IFRS, revealed that the accounting standards setter is prepared to make an explicit link to double materiality in its upcoming disclosure standards if pushed to do so by stakeholders. Currently, the draft version of the long-awaited disclosure standards is risk-based and focused on enterprise value – although it does make an implicit reference to the external impacts of companies. A consultation on the draft standards will run until 23 July.

Swedish pension buffer AP 7, which has successfully led legal action against Facebook, Alphabet and US-listed Chinese company Lucky Coffee, called for more investor support for litigation against companies over mismanagement. “Litigation is a very effective way to drive change at portfolio companies,” said AP7 strategist Charlotta Sydtsrand. “The fact is that there are many more cases which are admissible than there are filed, so there are a lot more funds to be recovered and not enough asset owners and managers who are willing to become plaintiffs.” AP 7, which runs the default option in the country’s defined contribution premium pension system, has 14 ongoing lawsuits against portfolio companies.

UK public pensions provider NEST complained of a lack of support from asset managers for resolutions opposing the appointment of laggard board members. “We’re just not seeing a critical mass of votes against board directors from asset managers despite this being one of the biggest levers available to shareholders.” There has been a push to hold individual board members accountable on environmental and social issues by voting against their re-election. This gained steam following a vote out campaign against former Exxon Mobil CEO Lee Raymond, which prompted his resignation from the board of JPMorgan in 2020.