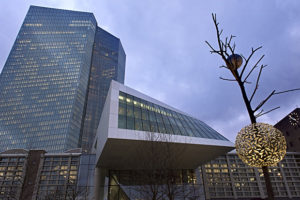 The President of the European Central Bank, Mario Draghi, has become the latest central banker to highlight the potential impact of climate risks on financial regulation and financial stability.
It comes as the ECB has joined a new top-level body called the Central Banks and Supervisors Network for Greening the Financial System (NGFS), which was formed at the Paris One Planet Summit in December last year.
Draghi said in a statement: “Given the direct implications that environmental risks and the transition to a sustainable economy could have for financial regulation and financial stability more generally, it is very valuable for the ECB to join the NGFS and actively contribute to its work going forward.”

The ECB has been under political pressure to assess the climate impact of its activities. In April, RI reported the Frankfurt-based institution was under pressure from some members of the European Parliament to integrate the Paris Agreement into its lending framework and assess the climate impact of its quantitative easing programme.
And in 2017 RI revealed that the ECB had held meetings with banking giant HSBC and asset manager Amundi on portfolio decarbonisation.
But in a letter to members of the European Parliament last year, Draghi said the ECB recognises that the correct pricing and supervision of financial risks stemming from climate change and environmental factors are “key to promoting sustainable development and preserving a well-functioning financial system”.

The first will map current supervisory practices for integrating environmental risks into micro-prudential supervision and review current practices on environmental and climate information disclosure by financial institutions and considers the extent to which a financial risk differential exists between ‘green’ and ‘brown’ assets.The second, macrofinancial, workstream focuses on sizing the risks to the macroeconomy and the financial system from the physical and transition risks associated with climate change.

The third workstream looks at the current practices of central banks and supervisors to incorporate ESG criteria in their operational activities and their involvement in monitoring market conditions and developments. It also outlines the role that central banks and supervisors could play in scaling up green finance.
The workstreams will build on the work of other bodies and feed into a first progress report to be issued by April 2019.
Also joining the group are the central banks of Spain, Morocco and Austria as well as the OECD as an observer. More members are expected to join shortly. The body is chaired by Frank Elderson, an executive director at the Dutch Central Bank where he oversees pension funds.

Meanwhile, new research has reportedly found that policymakers are being “misinformed” by the results of economic models that underestimate the future risks of climate change impacts. The paper was published in the Review of Environmental Economics and Policy, Science Today reported.

And in other news, to coincide with the G7 Summit in Canada, 288 institutional investors with $26trn in assets under management urged governments to step up their ambition and action to achieve the goals of the Paris Agreement, support investment in the low-carbon transition, and improve climate-related financial disclosures.