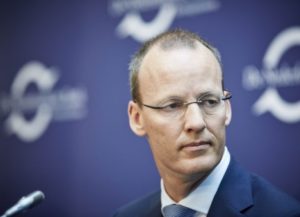 Dutch central bank DNB has become the latest European financial regulator to tackle the issue of climate risk, conducting a survey of the institutions it oversees to find evidence of a ‘carbon bubble’ – that is overexposure to fossil fuel firms whose fortunes are in doubt following the Paris climate accord (COP21).

Under COP21, governments pledged to limit global warming to two degrees Celsius this century. This can only be achieved through more regulation of carbon emissions and a switch to renewable energy, both of which would greatly harm the fossil fuel industry.

The DNB’s survey was published last week in Dutch. However, DNB President Klaas Knot referenced the survey yesterday (March 9) in the Dutch Parliament, and Responsible Investor has received a summary of his remarks in English.

According to the summary, the banks, insurers and pension funds the DNB oversees have low exposure to fossil fuels, and all insist they have plenty of time to get rid of that exposure. Knot put the Dutch banks’ exposure at 2% of total assets; that of insurers at 1.2% of assets; and that of pension funds at 5.5% of assets – or €38bn.

Knot told the Parliament: “Many (of those surveyed) see the transition to a low-carbon world as a gradual process and therefore believe they have sufficient time to react. Pension funds in particular say they are good at calculating climate risk, as this is something their stakeholders insist on.”

Dutch pension schemes have in fact begun reducing exposure to the fossil fuel sector. Just before COP21 in December, Dutch health care scheme PFZW said that it would divest from coal by 2020 and reduce its investments in oil and gas by 30%.ABP, the Dutch civil servant scheme, said it would cut the carbon emissions of its equity portfolio by 25% in part through divestment.

PFZW and ABP also have led the Dutch pension sector by announcing ambitious renewable and sustainable investment plans. In PFZW’s case, those investments should increase to 12% of its €162bn under management by 2020. ABP wants to double such investments to €58bn, or 16% of assets.

However Knot also quoted some Dutch schemes from the survey as saying: “Investments in renewables are themselves still seen as risky because of the uncertainty around the (state) subsidies they receive and the direction climate policy is heading in.”

The summary also reflects Knot’s belief that for COP21 to succeed, the price for a tonne of carbon emissions must be raised to €100 compared with just €9 currently. The hike in the price could be achieved in part by expanding the European emissions trading scheme (ETS) to include industries outside of it or taxing them directly for their carbon emissions, says the DNB.
It’s the latest push from policy makers to look at climate that has been led by the G20-level Financial Stability Board chaired by Bank of England Governor Mark Carney – and the Swedish financial regulator Finansinspektionen (FI).

The FSB has created a task force to assess companies’ climate risk disclosure. Meanwhile, this week FI said in a statement that while Swedish financial institutions had relatively small exposure to climate risk, their reporting on the issue could be improved.