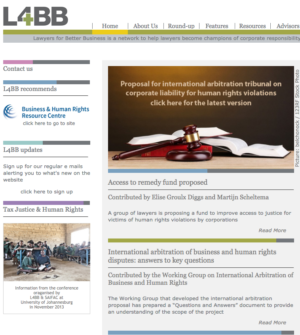 The Dutch Ministry of Foreign Affairs is supporting a project aimed at drafting rules for a new type of international arbitration focused on business and human rights (“BHR”) in order to provide victims of abuses with access to remedy, the third pillar of the UN Guiding Principles on Business and Human Rights.

The project follows a four-year review effort launched by Lawyers for Better Business (L4BB), a corporate responsibility network for lawyers, which will now open a rule-drafting consultation coordinated by The Hague Institute for Global Justice , a Dutch think tank and policy forum.

According to Margolis, the underpinning idea is to use a “mechanism that has already proved to work in the corporate world but turn it on its head and make it work for people harmed by corporations”.

In their paper the lawyers argue that “BHR Arbitration” can complement existing institutions such as the OECD’s National Contact Points. http://www.l4bb.org/news/TribunalV6.pdf

They suggest that NCPs’ final statements could recommend parties to submit their dispute to “a BHR Arbitration Panel for further mediation or formal arbitration that could lead to restitution.”

Under the scheme, a key point is that BHR Arbitration Panels would have authority to grant a wide range of relief (from monetary damages to injunctive relief such as enforcement of contracts) as part of their awards.Such awards would be enforceable in the courts of the 156 states that are parties to the New York Convention on the Recognition and Enforcement of Foreign Arbitral Awards.

BHR Arbitration, Margolis told RI, aims at closing “a gap where there is no accountability” due to the cross-border operations of multinationals, as well as to counter the “bad name” and negative perception of arbitration.

In that respect the lawyers’ proposals emphasise that BHR Arbitration would be different from investor-state arbitration “which sometimes challenge[s] host states actions to protect human rights”.

They stated: “We anticipate that under BHR Arbitration Rules, which are likely to closely follow the UNCITRAL [UN Commission on International Trade Law] rules on transparency […], would be open to the public and amicus pleading could be allowed.”

The lawyers also list benefits for multinationals upholding mandatory BHR Arbitration. It can help them manage their supply chain risks by including clauses in contracts with business partners, contractors and suppliers to comply with human rights norms, and if not, resolve potential disputes before a BHR Arbitration Panel.

Under the auspices of The Hague Institute for Global Justice, a two-year stakeholder consultation has been open to draft the rules, which will also be discussed at the 2017 UN Forum on Business and Human Rights, whose major focus this year is on the issue of access to remedy.