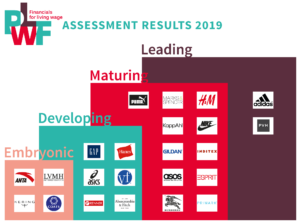 Clothing and footwear brands Nike and Burberry have improved their approach to paying a living a wage, according to the first annual assessment from the Dutch financial-sector led Platform Living Wage Financials (PLWF).

PLWF launched last year with the goal of encouraging and monitoring companies on paying a living wage throughout global supply chains. It won the PRI award for active ownership this year.

“We often hear that investor influence has helped progress.”

The initiative, based on the United Nations’ Guiding Principles on Business and Human Rights framework (UNGP), was founded by Dutch institutions ASN, MN and Triodos. It has 12 financial sector members, collectively managing €2.5trn in assets, including Europe’s largest asset manager, France’s Amundi.

PLWF’s first assessment report, ranking 24 companies in the footwear and apparel sector, was released this week at an event hosted by Robeco, one of the partners.

Kristina Stonjeková, Advisor on Responsible Investment at MN and Chair of the PLWF Working Group on the garment and footwear sector, said while still a young initiative, PLWF had achieved tangible results through robust engagement.

This year, Asics and VF Corp. (Timberland and The North Face) moved from embryonic to developing stage and Nike and Burberry from developing to maturing, while Adidas and American clothing company PVH (Tommy Hilfiger and Calvin Klein), moved from maturing to leading.“There was no company in the leading category a year ago,” said Stonjeková. “Some of the company improvements have been due to existing initiatives. But we often hear that investor influence has helped progress. It’s useful for companies to have discussions to help them frame the issue better and ultimately introduce programmes that will trickle down into supply chains.”

Stonjeková said the garment & footwear assessment methodology, independently assured by accountancy firm Mazars, will get stricter over time. In 2020, PLWF is considering more advanced indicators such as requiring living wage projects to be at scale and more transparency on the issue publicly from companies.

The PLWF event included an interview with H.E. Sheikh Mohammed Belal, Ambassador of Bangladesh, the world’s second-biggest exporter of ready-made clothing (after China).

“It was positive to have a representative of a garment sourcing country attend. As it’s not only up to companies to improve their buying practices and engage in collective bargaining to address wages, but it’s also up to governments to ensure that companies pay better wages through more robust minimum wage regulation,” said Stonjeková.

Going forward the PLWF plans to do annual assessments of the food retail and food & agricultural sectors, and is currently in engagement with them. Link