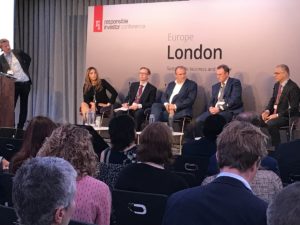 “We need to look at accountancy and audit rules. Aside from current book values there should also be accountancy procedures which look at how companies would be valued in a Paris-compliant world, and the gap between the two tells a big story. At the moment its hidden and it shouldn’t be.
“Companies may have to be forced to do it.”
He went on: “I think disclosure should be on the basis of Paris compliance. Is a particular company or fund on a trajectory to Paris compliance in the next few years and what have they done to achieve compliance?”

Davey is one of the two candidates vying for leadership of the Liberal Democrats, which have been given a boost after making gains in the recent EU Parliament elections.
When asked if this was a policy commitment if the party got into power, Davey said: “I’ve just made it.”

It comes as the ruling Conservative government has been backing responsible investment, with Pensions Minister Guy Opperman recently backing a campaign by trustee body the AMNT to get fund managers to vote in pooled funds according to client ESG preferences.Managers who refused to do so were called “obstructionist” and such practices were “utterly unacceptable”, he said.

“I think disclosure should be on the basis of Paris compliance”

Separately, Davey announced the establishment of a new All-party Parliamentary Group on Sustainable Finance in the UK Parliament. APPGs are informal cross-party groups of MPs who have a common interest in a particular policy area.

He said: “It will look at how we can encourage the Treasury and other regulators to adopt some of the ideas we’ve talked about and giving them teeth to do it. We will also look at how other aspects of the public sector, local authorities for example can get more engaged as well.”

Just this month Chancellor of the Exchequer (Finance Minister) Philip Hammond said the cost of plans to make the UK economy net zero would cost more than £1trn.
But Davey said: “There is a real prize here for London. Currently, 15% of fossil fuels are financed in the City (finance district) but if we can turn things around and start leading on this, then we will be really well positioned to attract some of the capital that is needed to fund this transition.”