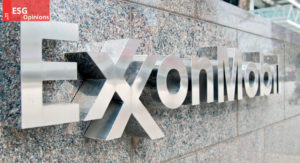 This year’s ExxonMobil shareholder meeting on 26 May will be one of the most significant AGMs since the advent of modern responsible investment. At it, investors will cast the votes that will determine the make-up of the ExxonMobil board as the global transition to net zero emissions gathers pace.

For the first time, Exxon investors are being offered the opportunity to appoint alternative directors, who would bring much needed value creation and energy transition experience to the board. It is an opportunity all investors committed to responsible investment must seize.

My journey with Exxon – assembling the 62%

My journey engaging with Exxon lasted nearly five years. In 2015, at the Church Commissioners, I started to work in a transatlantic partnership with New York State Common Retirement Fund. The aim was to move Exxon forward on climate change following the early successes in climate engagement with BP and Shell.

We jointly filed a shareholder resolution that asked Exxon to report annually on the implications for its business of a well below 2°C climate scenario. Shocking though it is to recall, at that time Exxon’s position was that a well below 2° scenario was not within the “reasonably likely to occur” range of planning assumptions.

Some investment managers may be tempted to split the difference and back some of the Engine No. 1 slate and some of the management alternatives. This would be a cop-out. Asset owners must make clear to their managers that they will not stand for it

In 2016, the resolution attracted 38% support, against the recommendation of the board. In 2017, the resolution went to a vote again. The board continued to resist it. This time the proposal received 62% support. It was a landmark moment for responsible investment. BlackRock, Vanguard and State Street Global Advisors all voted in favour of the proposal.

The resolution had a positive impact. Exxon started to conduct 2°C scenario analysis annually. The company consistently and publicly backed US participation in the Paris Agreement even after the Trump administration had committed the country to withdrawal.

In 2018, the Church Commissioners and New York State were appointed Climate Action 100+ co-leads for Exxon and began to engage on the core objective of the initiative – securing a commitment to reduce emissions across the value chain consistent with the goals of the Paris Agreement.

Again, Exxon dug its heels in. In March 2018, at its analyst meeting, the company launched what it described as “an aggressive growth strategy” to increase its production of oil and gas by 25% by 2025.

The company also blocked our attempts to file a shareholder resolution calling for greenhouse gas emissions reduction targets consistent with the goals of the Paris Agreement.

It quickly became crystal clear to us that the problem was the board. It was our view that a combined Chairman and CEO role, together with a lack of appropriately skilled independent directors, meant that non-executive directors were failing effectively to oversee – and challenge – management.

At the shareholder meetings in 2019 and 2020, both the Church Commissioners and New York State Common Retirement Fund backed the shareholder proposal calling for an independent chairman, and both voted against the entire board.

I knew, however, that shareholder resolutions were not the only answer, and that simply voting against the board was insufficient. When a company’s strategy and board are failing investors, there is only one recourse: to mount an activist campaign with a plan for change and to put forward new directors who will be able to oversee it.

I had started to explore possibilities with a number of investors before leaving the Church Commissioners in mid-2020 and was delighted to see the Engine No. 1 campaign launch in December last year. This campaign is exactly what the situation at Exxon demands.

15 years since the establishment of the PRI, it is time for signatories to show that when a company defies its investors on ESG issues, they will take decisive action to force board upgrades

Investors have endured five years of miserable performance while Exxon has chased production growth and sought to defy the realities of the Paris Agreement. At last, investors have the chance to back an alternative slate of directors who can bring real change.

These are four director candidates with successful track records in conventional and new energy. Four candidates with a commitment to disciplined capital allocation and repositioning Exxon to succeed in a decarbonising world: Gregory Goff, Kaisa Hietala, Alexander Karsner and Anders Runevad. They are to replace Steven Kandarian, Douglas Oberhelman and Samuel Palmisano, who presided over the decision to chase production growth in 2018; as well as new board member, Wan Zulkiflee, whose experience is in state-owned, not publicly-traded, oil and gas.

This is the moment for responsible investment to come of age. This is the moment for net zero commitments to be backed by action. 15 years since the establishment of the Principles for Responsible Investment, it is time for signatories to show that when a company defies its investors on environmental, social or governance issues, they will take decisive action to force board upgrades. The boards of the biggest global companies must be fit for purpose for a sustainable future.

Some investment managers may be tempted to split the difference and back some of the Engine No. 1 slate and some of the management alternatives. This would be a cop-out. Asset owners must make clear to their managers that they will not stand for it.

The Engine No. 1 slate is a package. Climate Action 100+ has flagged the support for the alternative slate by CalPERS, one of the co-leads for the initiative's engagement with Exxon. The change this company, the climate and all our portfolios need will only be affected if all four Engine No. 1 candidates are elected.

Investors in Exxon cannot afford to let this unique moment pass. It is time for the 62% to flex its muscles again.

Edward Mason is Director of Engagement at Generation Investment Management, which does not hold shares in ExxonMobil. Between 2014-2020 he was Head of Responsible Investment at the Church Commissioners.