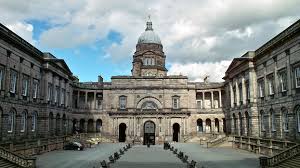 The UK’s third biggest university endowment, the £291m (€405m) Edinburgh University, will instruct its asset managers Baillie Gifford, BlackRock and Royal London Asset Management (RLAM) to engage on climate change with its £27m in fossil fuel holdings, as it announces a new fossil fuel investment policy in reaction to a student divestment campaign.

The policy, announced today (May 12), falls short of divestment, but commits the University to withdrawing from coal and tar sands if realistic alternative sources of energy are available. Fund managers will be required to report on their portfolio emissions and benchmark them according to best performance in the sector. And it has committed to prioritizing low or zero-carbon investments where possible.

The decision follows a consultation with staff and students and research by a review group.

The University Court of Edinburgh University, its highest decision-making body, has accepted and approved the recommendations made by the group, released in a 23-page report.

The group noted that many developing countries depend on fossil fuels for heating, water and refrigeration. An abrupt shift away from them would hit some of the world’s poorest communities.It concludes that full divestment would hit learning and teaching and research at the university. “Full divestment could – and likely would – be seen as calling into question the appropriateness of teaching about fossil fuel exploration, and the appropriateness of carrying out research on means of exploitation of fossil fuel resources.”

The panel also finds that the stranded assets argument needs further review, and has asked the university’s investment committee to investigate this as soon as possible. The decision on divestment goes against a recommendation made in April by the university’s central management group to divest from coal and tar sands.

The move has been condemned by student campaigners as “bowing to the fossil fuel industry lobby”. It had been hoped Edinburgh would follow fellow Scottish academic institution Glasgow University, which committed to divesting from fossil fuels last year.

Edinburgh, the first university in Europe to commit to the Principles of Responsible Investment, has 8.8% of its endowment exposed to fossil fuels. Of this 17.87% (£10m) is managed by Blackrock, 11% (£5m) by RLAM and 8.55% (£12m) by Baillie Gifford. BlackRock and Baillie Gifford in particular were actively engaging with companies on climate change. Separately, the University will conduct a similar review around armaments investments. Link