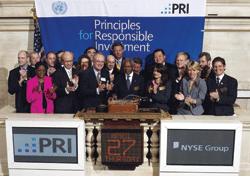 Six years after its launch, the UN-backed Principles for Responsible Investment is facing one of its first major credibility tests.
To date, it’s been relatively plain sailing: signatories have signed up in droves – including most of the large asset managers – and the organisation has pushed ‘responsibility’ to become part of the mainstream debate about how institutional assets are managed.
But the PRI has hit a hurdle in its aim to demonstrate what its signatories ‘mean’ by responsible investment via its reporting framework, which was designed to show how signatories are implementing and progressing the six PRI Principles; in themselves a rather innocuous list of ‘aspirations’. Its original incarnation looked to incorporate a significant amount of comparitive information so that it could act as an incentive for signatories to genuinely improve their ESG activities.
Following a significant push-back from members, the PRI is back to the drawing board. As RI reported recently, the most recent PRI signatory reporting assessments were released in 2011, and under the new, revised plans the next signatory assessment data will be released sometime in 2014. That’s a worrying three-year hiatus.
Signatories have raised issues about data security, client confidentiality and the complexity of the reporting process, despite the PRI’s attempts to lighten the burden in recent years. But much resistance appears to have coalesced around whether the reporting process implies that there is a right way to do responsible investing. That’s clearly a challenge when so many asset owners and asset managers have different ways of thinking about the subject, from ethical screening to best-in-class strategies or targeted ESG investments. A number of asset managers have used their previously awarded PRI ‘scores’, which are relative to other signatories within peer groups, as part of their marketing. That won’t have pleased fund rivals who may be making progress, but can’t necessarily demonstrate best practice.Somewhat ironically, given its focus on investor/corporate engagement, it looks like the PRI failed to engage fully with its own stakeholders on the unintended consequences of reporting.
It’s also legitimate to ask whether the problem reflects the shift away from the original asset owner-only board at the PRI to the mixed asset owner/manager board it has today?
Either way it exposes a conundrum. Without meaningful reporting and accountability by signatories, the PRI’s Principles may remain little more than aspirations. The mandatory, comparative reporting framework at least meant signatories had to justify their progress against the initial signing up, with a little peer pressure to spur them on.
As the PRI seeks to enter the public policy arena, policy-makers (and critics) could be justified in asking what the PRI actually does if it can’t get beyond the ‘big tent’ without being able to demonstrate measurable, relative progress. It’s a syndrome that the Global Compact, the PRI’s corporate peer, previously suffered.
But getting to some kind of non-threatening comparator of signatory activity could remain difficult unless the PRI can come up with a clever solution. PRI Chairman, Wolfgang Engshuber, has suggested that the final framework would look to provide the PRI’s diverse signatories with a more narrative approach to reporting with “greater flexibility to report their responsible investment activities in ways that best reflect each organisation’s unique approach, over a timeframe that is most appropriate for them.”
That sounds like a rather weak kop out, without wishing to presage the results. Let’s hope the PRI can find the right balance of bespoke reporting within a comparable framework. Cynicism can set in quickly to initiatives if signatories can report what they wish without some form of quality control.