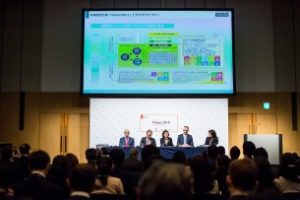 Delegates from leading investment institutions, asset owners, associations and governmental organisations came together recently in Tokyo for the RI Asia Japan conference 2019.
Influential asset owners including GPIF, Dai-ichi Life Insurance Company and MS&AD Insurance Group Holdings shared their long-term plans and rationale to incorporate ESG into their investment process. Break-out sessions at the conference addressed topics such as ESG in supply chains, the value of natural capital, and how to contribute to the financing of SDG 14 “Life below water”.
Driven by the themes of climate change and the SDGs, the panels, interviews and keynotes examined the risks and opportunities that investors are facing as the world transitions to a low carbon economy, and hopefully rapidly: As Mario Nava, the European Commission’s Directorate-General for Financial Stability, Financial Services and Capital Markets Union (DG FISMA), noted in his keynote speech: “We have a window of opportunity from now until 2030.”
SDGs
Masaya Futamiya, Chair of the Committee on Corporate Behavior & Social Responsibility at Japan’s powerful business lobby Keidanren, as well as Director-Chairman at Sompo Japan Nipponkoa Insurance, said the SDGs were central to bringing about “Society 5.0”, where innovative technology and economic growth go hand in hand with solutions to challenges including climate change. Keidanren has thrown its weight behind promotion of the SDGs through the work of a dedicated internal committee. Futamiya said: “SDGs are a common language… for solving issues and value creation.”
Matt Christensen, Global Head of Responsible Investment at AXA IM, said that where the socially responsible investment (SRI) movement had been focused on values, and the ESG world on investment value, the SDGs had shifted the sustainability focus to societal outcomes. He said the addition of SDGs to the ESG world was a challenge from a data perspective, but that AXA was looking for data providers to narrow the data gap. “It’s a wonderful time to be providing solutions for investors. It’s now not acceptable to do nothing onSDGs because so many investors assume you do something. If not, you’re really behind the curve.” He noted that green bonds, another sustainable finance initiative, had given corporate bond issuers and investors a way of proving impact, for example through quantifying avoided CO2 emissions. Chris Newton, Executive Director Responsible Investment at Australian infrastructure investment manager IFM Investors, said asset owners increasingly wanted to track activity on the SDGs. But expectations vary wildly: “Investors in Europe and the Nordics are very interested around what you’re achieving, Australian investors are interested in what’s driving performance, while Asian investors are asking what your SDG priorities are?”
Taskforce on Climate Related Financial Disclosure (TCFD)
In a panel session on TCFD and Global Regulations, Satoshi Ikeda – who recently took up the newly created Chief Sustainable Finance Officer role at Japan’s Financial Services Agency (FSA) – ruled out making TCFD mandatory. Speaking about corporates which have requested the FSA do so because “it’s easier to explain to senior management”, he said: “That attitude is least welcome.” The FSA, as outlined by Director General of the Strategy Development and Management Bureau Kiyotaka Sasaki in a keynote speech, is, however, actively promoting TCFD in Japan. Ikeda said: “Our primary focus is that corporates should enhance their value by making strategies aligned with global trends in response to climate change.” He added that a TCFD consortium, an FSA and Ministry of Economy, Trade and Industry (METI) collaboration coming up in late May, is intended to promote investor-company dialogue on embracing climate change for strategic corporate value. A condition for attending the consortium is being a TCFD supporter, and global supporters are also eligible to attend. A total of 76 Japanese companies and organisations – one third from the financial sector – have made public commitments of support for TCFD. Meanwhile, Masamichi Kono, OECD Deputy Secretary-General, said 60% of asset owners globally do not meaningfully report on their approach to climate change, according to the Asset Owners

Disclosure Project. North American and European actors shared their views on disclosure and reporting initiatives in the following panel discussion. Michael Zimonyi, Policy & External Affairs Manager, Climate Disclosure Standards Board (CDSB), said good progress had been made in the first year of reporting on TCFD, with 30 of 80 companies acknowledging the initiative in their annual reports, but that implementation is still in early stages and there remains a lack of awareness around available resources. SASB’s Katie Schmitz Eulitt said even companies attempting TCFD-aligned reporting often do not tie this back to the financial impact of climate risk. She said: “There is a concern for corporates – am I able to do what is expected for me?”
Scenario analysis
In a panel session on how to make use of climate scenario analysis, Emilie Mazzacurati, Founder and CEO of climate data house, Four Twenty Seven, warned investors not to assume that a low emissions scenario will be accompanied by a low physical impact, and that a high emissions scenario will be high physical impact: “It doesn’t work that way,” she said. “It’s actually quite likely that a low emissions, rapid transition and high impact scenario will come together.”
Mazzacurati laid out four scenarios based on the interplay between two important but equally uncertaindimensions: the physical impact of climate change, and how much is invested in adaptation. In a best case scenario, she said, “we can be smart and make sure that as few people and assets [as possible] are affected, but it will require a level of investment and engagement in adaptation that we are not seeing today.” Meanwhile, in a worst case scenario, she said, real estate markets will be “crushed” by climate change: “We’re going to see a lot of value destruction and loss of human life if we don’t invest.” Nadine Viel Lamare – Director of the Transition Pathway Initiative – said the online tool, which assesses companies’ preparedness for the low-carbon transition, was adding shipping and chemicals as two new sectors this year. Viel Lamare, who was formerly Head of Sustainable Value Creation at Swedish buffer fund Första AP-fonden (AP1), admitted the tool, which provides data for the investor engagement initiative, Climate Action 100+, doesn’t take all carbon emissions into account because of lack of disclosure on the part of companies. She explained the importance of both carbon footprinting and stress-testing portfolios: “Carbon footprinting is a one-off measurement at one time of how much you’d suffer if there was a carbon price tomorrow,” she said. “It doesn’t really tell you if your portfolio is fit for the future and will still exist 20 or 30 years down the road.”