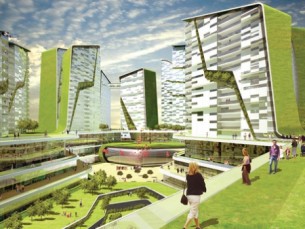 A new report looking at the prospects for low carbon energy efficiency projects in cities says institutional investors could be a prime source for the major upfront capital investment required, but counters that returns of 5-7% may be low in comparison to other infrastructure projects and with a higher risk profile. The research report, titled: Funding Low Carbon Cities: Mapping the Risks and Opportunities, funded by the UK’s Centre for Low Carbon Futures and the Centre for Climate Change Economics and Policy, says investors such as local authority pension funds have identified energy efficiency refits in cities as an investment that could fit their strategic requirements. At the same, low carbon projects by the same local authorities need the scale of investment that large institutional investors can provide. The report says bridging the gap could deliver commercially viable, cost-effective investments in energy demand reduction that would deliver a 40% reduction in greenhouse gas emissions from cities by 2020, as well as increased employment and reductions in fuel poverty. These would be in line with current government environmental targets. The report notes that approximately 70% of the UK’s economy-wide emissions are under the influence of UK localauthorities as the bodies responsible for much property ownership and future planning and development. It cites the example of Leeds City Region, where it says there is a commercially attractive plan for £4.9bn of investment in low carbon options, which could in turn reduce the city-region’s energy bill by £1.2bn a year, cut carbon emissions by 36%, pay 8% interest rates within 4 years and create 4,500 jobs. It notes, however, that the scale of this investment dwarfs plans for country-wide government-backed environmental investment such as the Green Deal. And it says institutional investors could see such low carbon investments as novel and high risk and so would seek higher returns in compensation. Infrastructure investments, it says, generally pay out returns of 10-15%, depending on the project. It is also unclear what investment vehicles could suit localised energy efficiency investments.
Among other conclusions, the report says local authorities should engage with investors to understand what sort of investment vehicles they might invest in, what sort of investment returns they would expect from these investment vehicles, and at what risk levels.
Link to report