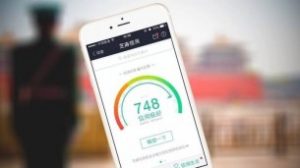 China has more video surveillance cameras than the rest of the world put together. It now plans to triple this number. After several pilot schemes across the country, China’s “Social Credit System,” will be rolled out nationally in 2020. This will eventually assign a ‘score’ to each citizen (all 1.4 billion of them), and to every company doing business in China. They will be constantly monitored, and rewarded or punished for their behaviour. It’s social engineering and enforced conformity on an Orwellian scale. It makes you understand some of the desperation underlying the violent protests in Hong Kong. Big Brother armed with big data really is frightening.

Some have suggested the Chinese Government must have been inspired by Netflix’s Black Mirror to dream up this vast social experiment but, in many ways, it’s just a big-data, gamified, version of the old Communist Party’s control methods. At the heart of all the pilot systems is the concept that each citizen is assigned a score that goes up or down according to behaviour, which is monitored electronically through your social media accounts, credit cards, and payment systems like Ali-pay (what you buy affects your score), and through that vast array of video surveillance cameras. China is now the world leader in facial recognition technology (FRT), and FRT machines (rather like metal detectors) are being placed at the entrance to subway stations in many cities. The Police are even being given FRT glasses that show everyone’s score, and alert them to ‘criminals.’
Behaviour is also monitored physically through an army of “information collectors”; busybodies who patrol their neighbourhoods and meet targets for informing. Beijing has about 850,000 “informants” patrolling its streets.
The opportunities for raising your score seem rather limited.The Government offers examples like helping an elderly neighbour, donating blood, or buying nappies (having children is clearly considered a good thing).

Reporting on others is rewarded, as is sharing “positive energy.” Saying things on social media that praise the government, the country or indeed the Social Credit System itself. Otherwise the list seems rather limited. Inevitably, the safest way to have a high score is by being a party member, although there are also “donation centres” where you can gain points by making “donations,” which supposedly go to different charities. Ahem.
On the other hand, there are no shortages of ways to lose points. Littering, having a messy garden, not paying fines, misbehaving/playing loud music on a train, standing up in a taxi, buying “too much” alcohol in the supermarket…
Facial recognition is infamously used to spot traffic offenders and jaywalkers. Some pilots have included medical records (are you punished for being sick?) and academic records. In one city in East China the facial expression of pupils is monitored by FRT to check they are being attentive in class. The easiest point-losers are ‘thought crimes.’ Posting ‘inappropriately’ on social media, or your choice of online friends and interactions with them. China’s most popular messaging app WeChat is fully accessible by the authorities.
Your score has meaning. On one level it’s all about reputation. There are crude posters placed at popular intersections parading high scorers with sashes and plastic trophies, and grim mug shots of low scorers. These are even reported on local TV stations. Traffic police in Shenzhen have started displaying offenders’ names and photos online. There are apps in China that show you the scores of those around you. Even the online dating system Baihe now includes your score.
But there are also “real” consequences. High scores mean discounts on utilities and housing costs and help renting a car or a hotel room.
They mean faster broadband and a fast-track in dealing with government bureaucracies, for example access to Schengen visas. That Chinese tourist next to you in the queue at the Louvre will need a high score in future.
Low scores are punished, and some are “blacklisted”. This means you are no longer able to buy train tickets or plane tickets, or you are restricted in getting a job, putting children in schools or buying high-end products. One guy in this situation complained that for one journey instead of three hours on a high-speed train, he had to take a bus and it took ten. China boasts that millions of people have been blocked from buying high speed train tickets, and more than eleven million from buying flights. This is just in the pilot schemes.
For some companies this marriage between communist oversight and capitalist ‘can do’ is proving a bonanza. The security surveillance market in China is already worth $120 billion, and Chinese start-ups are world leaders in FRT. Companies like Megvii Technology (backed by Alibaba), SenseTime, and YITU technology (which recently raised $400 million from investors including Sequoia Capital).
Various major companies have been involved in the pilots developing algorithms and systems, including Tencent’s partner China Rapid Finance, and Sesame Credit, run by the Ant Financial Services Group (AFSG), spun out of Alibaba. Questions have been raised over whether companies involved in the pilots have additional financial interests. Wired reported that high scorers were rewarded with opportunities to take out loans from the very companies running these algorithms. They are certainly getting data on a gargantuan scale. Sesame Credit has teamed up with Didi Chuxing, the ride-hailing company, and Baihe, the country’s largest online matchmaking service. They know an awful lot about an awful lot of people.Imagine the opportunities as China moves from pilots to national roll out? But, for responsible investors, there are surely ethical questions as well. That includes international companies. Last year Google’s research scientist Jack Poulson publicly resigned criticising “Project Dragonfly,” a version of Google Search tailored to the censorship and surveillance demands of the Chinese government. All companies operating in China will be assigned a score and monitored. It may be no bad thing that some will be punished for poor product quality, environmental pollution or poor treatment of workers. But the system also allows the authorities to punish “endangering national security” or “national unity.” Broad terms open to manipulation.
Recently, international airlines were told they would be punished if they continued to show Taiwan as a separate country to China on flight maps. They complied. Japanese retailer Muji made a similar mistake and was fined 200,000 yuan for damaging “the dignity or interests of the state.” One U.S. industrial chemicals company operating in China was told that it had to start prepaying its phone bill in person because of the result of an unrelated tax issue entered into the social credit system.
Conformity is a big part of what this new system is about. Inevitably, journalists who criticize, and those who expose party corruption, are given low scores. Their social media accounts are closed. There is even talk of restricting people to their homes. If I were in China, I would be punished for writing this article. You would be punished for reading it. Think about that next time you buy a train or plane ticket, or go on Facebook or Twitter. We’re all told to invest in the future. Is this a future you want?