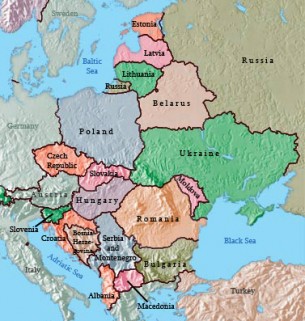 Sustainability reporting by Eastern European companies is rapidly catching up on that of Western European peers with Polish and Russian company information on average now nearly as good as that of Austrian, Greek and Irish companies, although still significantly lagging the top performers in Sweden and France, according to a study by Swedish research group, GES Investment Services.
GES assessed a total of 746 European companies according to its ratings criteria, which is based on international norms for ESG issues. It found five clusters of ESG performance:

Martin Pitura, managing director of GES Investment Services Poland, commented: “While the top indexes take a clear lead, the crowd around average rating offers an interesting forecast about the development in the rest of Europe. Indexes from New Europe are close to catching up on ESG reporting with indexes in Austria, Greece and Ireland. The Polish RESPECT index even slightly exceeds the Greek FTSE Athex 20 index. It should also be noted that the gap between the third and fourth cluster is quite small, especially for the indexes from Hungary and Slovenia.” Breaking down the E, S and G categories, Pitura said corporate governance reporting in Eastern Europe was competitive with the rest of Europe. But he added: “The difference in environmental and social performance between New Europe and the rest of Europe is however quite large. Our estimation is that the current leaders in New Europe were on the same level ten years ago as the current laggards in Europe are today. For the coming years, we expect to see that companies from New Europe continue to improve their ESG reporting, which will make them more attractive for investors.”
Link to GES