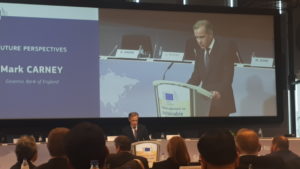 Last week, the journalists at Responsible Investor discussed the words and phrases we would ban from the ESG landscape if we could. “It’s an evolution, not a revolution”; “We can’t let perfect be the enemy of good”; “You can see that we’re leaders on sustainability because we’re signed up to the PRI”; and so on and so on.
Top of my own list was the phrase: “We’ve reached a tipping point”. It never seems to mean very much, or be quantifiable. The green bond market has ‘hit tipping point’ about 50 times in the five years I’ve been writing about it, and the SDGs are regularly doing the same now, closely followed by ‘investor awareness’ about sustainability.
But then, something happened.
Yesterday, sitting in the European Commission building in Brussels, for the High-level conference: A global approach to sustainable finance, I watched tens of politicians, company leaders, central bank representatives, campaigners, investors and others (almost all men, but I’ve written that piece already), gather to discuss sustainable finance. The discussions stayed surface-level for the most part, but the event – the third of its kind held by the Commission – felt different from previous years. There was a genuine sense of urgency. And, for the first time, everyone seemed to have a relatively credible game plan.

“Asset management is one of the highest paid industries – it has been recruiting the cream of the colleges over the last decades – and yet they say they cannot change their business practices without getting regulated? That’s embarrassing.” – GPIF’s Hiro Mizuno