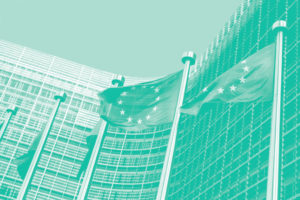 It looked set to be a quiet month for the EU sustainable finance agenda in May. With so many consultations launched in April, the summer was expected to be a bit of a waiting game.

But it turned out not to be.

To address the Covid-19 pandemic and stimulate an economic recovery, the European Commission on Wednesday presented its plans to revise the upcoming EU budget, in a €1.85trn package that includes €750bn of additional recovery funding to be raised on the capital markets. The Commission said it would generate extra revenues to repay that debt over the medium term through a plastics tax, a tightening of the EU Emissions Trading System and an import levy on goods from countries with weaker emissions standards than the EU – among other things.

Loans and grants provided from that €750bn will have green conditions attached, and will be offered to “crisis impacted but viable companies to emerge from the crisis, in particular to accelerate the green and digital transition” and to “mitigat[e] the impact of the Covid-19 pandemic on the just transition towards a green economy”.

Crucially, spending will be guided by the green taxonomy – the new framework created by the Commission and its Technical Expert Group on Sustainable Finance to identify business activities that support the goals of the Paris Agreement. That includes the “do no harm” principle, which is embedded in the legal text of the taxonomy, and means that even if an activity supports one environmental objective – climate mitigation, for example – it is excluded if it causes notable harm to another – biodiversity, say. Fossil fuels, including nuclear, are expected to be off the table on this basis, so the Commission's current plans should mean recovery financing will not be available to firms in those sectors.

There was already a commitment in place to spend 25% of the new EU budget, which begins next year and will last for seven years, on decarbonisation and the green agenda (the current budget has a 20% commitment). This pledge has now been extended to cover the additional funding too. WWF was among those to criticise the Commission for not increasing the 25% further in the revised plans.

Deadlines have been pushed back

Inevitably, the current crisis has led to some delays in the EU Action Plan agenda. Most notably, the timeframe for the Renewed Strategy – the sequel to the Action Plan, which is currently being consulted on – has been pushed back to Q4, from Q3.

May started with a lot of noise from MEPs, investors and civil society, who slapped down the technical advice given by the European Supervisory Authorities (ESAs) on the Disclosures Regulation. The ESAs recommended that disclosure around “fossil fuels sectors” should be limited to “investment related to production, processing, distribution, storage or combustion of solid fossil fuels”. In other words: just coal and lignite. In a letter to the heads of the three authorities, who between them oversee EU pensions, insurers, banks, investment managers and credit ratings agencies, MEPs described it as “a concerning interpretation”.

“Such a narrow definition does not consider a significant amount of economic activities and energy sources, for example oil, including transportation fuels, heating and cooling, machinery, energy production and power production,” the letter points out.

The ESAs proposals are currently out for consultation.

The Alternative Investment Management Association (AIMA) this month released a guide to the Disclosures Regulation, which can be found here.

Further moves to broaden the green agenda beyond climate

The European Commission unveiled two more strategies this month that will sit under the European Green Deal, and take it beyond decarbonisation. The first is a biodiversity strategy for 2030, which seeks to support the restoration of nature by reversing biodiversity loss and repairing existing damage to ecosystems. The second strategy is nicknamed “farm to fork” and focuses on the sustainability of food and agriculture in Europe. Neither strategy centres on private finance, but both reflect the expansion of the green agenda more broadly: the EU taxonomy is due to widen from climate mitigation and adaptation to waste, water and biodiversity later this year, and investor initiatives on water and biodiversity have recently been launched.

In a bulletin published yesterday, Dutch central bank the DNB proposed some climate-related conditions for the European Central Bank (ECB) to consider. The ECB has been looking at options to “green” its monetary policy lately – a very controversial move, especially in relation its bond buying programmes, which some say should be agnostic to the “politics” of climate change. The DNB waded into the debate to suggest “a possible risk-mitigating measure is to include reporting on CO2 emissions from companies as a condition within the purchasing programmes”.

“The transparency is necessary to properly estimate and price the risks,” it added.