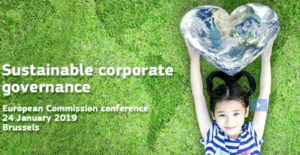 The implementation of part of the European Commission’s Sustainable Action Plan could open a Pandora’s Box for the mainstream theory of shareholder value maximization.
Action point #10 of the Plan calls for fostering “sustainable corporate governance” as a means to reduce short-termism in capital markets.
It is broken down into two recommendations.
First, the European Commission is to undertake consultative work by the second quarter 2019 on whether boards should disclose sustainability strategies and measurable targets. That encompasses whether corporate law should require directors to act in the company’s long-term interest.
Second, it recommended the European Supervisory Authorities (ESAs: the European Banking Authority, the European Securities and Markets Authority and the European Insurance and Occupational Pensions Authority) collect evidence of undue short-term pressure from capital markets on companies, particularly portfolio turnover and equity holding periods of asset managers.
The EC’s Directorate-General for Justice and Consumers (DG JUST) kicked off the consultative work with a conference last week , where a number of stakeholders and policymakers called for rethinking capitalism in a more European fashion.
Paul Tang, MEP for the Dutch Labour Party, said: “I have always been surprised by how quick the Anglo-Saxon ideas of shareholder value and remuneration have been introduced in Europe. I don’t think they were very European from the start.”
Tang said the position of the European Parliament, of which he is the rapporteur for the proposed regulation on sustainability disclosures, has moved towards the opposite direction, from shareholder to stakeholder value.
Likewise, Dominique Potier, French MP and rapporteur of the “Devoir de Vigilance” [Duty of Vigilance] law (which came into force in 2019 after a preparatory phase in 2018), called for a new form of European capitalism different from the Anglo-Saxon model.
Potier described the experiences behind the draft of the law, which originated from the idea of overcoming the “shareholder dictatorship”.
This French law introduced a legally binding obligation to produce a “vigilance plan” in which parent companies should identify and prevent adverse human rights and environmental impacts resulting from not only their own activity but also their supply chains.Potier appealed to the European authorities to extend this duty of vigilance into EU law.William Lazonick, Professor of Economics at the University of Massachusetts Lowell, said that maximizing shareholder value is a dominant “theory of value extraction, not value creation” in which “value-extracting insiders” are the executives, and “value-extracting enablers” are institutional investors.
He said the “shareholder value ideology” assumes that only shareholders take risks. Lazonick dismissed this as “nonsense” and argued that workers and taxpayers are the real value creators, while “shareholders, so-called investors, don’t invest in the company, they just buy and sell shares”.
He added: “Workers go every day to work and take risks on whether they are going to get the value they create. We, as taxpayers, we fund infrastructure that all these companies use. We are at risk whether they are going to make money out of it.”
Beate Sjafjell, Professor of Law at the University of Oslo, presented some of the findings of a research project called Sustainable Market Actors for Responsible Trade (SMART).
The SMART project concluded that corporate law needs reform, with greater clarity on directors’ duties.
“Company law is not the problem. The problem is what it doesn’t say about sustainability. It doesn’t say either that boards are meant to promote maximizing returns for shareholders,” Sjafjell said.
She observed that this “Anglo-American myth” is holding back the potential of the Non-Financial Reporting Directive.
Sjafjell added that company law reform offers “an opportunity to set out clearly that the duty of the board is to ensure sustainable value creation within planetary boundaries”.
Wolfgang Kowalsky, Senior Policy Advisor at the European Trade Union Confederation, said that the shareholder value model, which dominates mainstream economic theory, has not been able to answer major challenges of our time such as climate change and income inequality.
Kowalsky encouraged the EC to be “courageous” and consider introducing a European model that supports workers on boards and differentiated voting rights for longer term investors and which links top management remuneration with the achievement of sustainability goals.
DG JUST announced at the conference that it will launch an online platform to continue consulting on sustainable corporate governance.
Closing the event, Tiina Astola, Director General of DG JUST, said that corporate governance cannot prioritize the interests of the few, because in the long run, that goes against everyone.