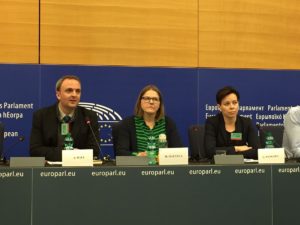 Faith investment group the Interfaith Center on Corporate Responsibility (ICCR) has expressed its support for migrant rights and supply chain campaigner Andy Hall who has been sentenced by a court in Thailand and whose case has been taken up by the European Parliament and Commission.

Hall, a campaigner with the Migrant Workers Rights Network and who recently spoke at the PRI in Person event in Singapore, was sentenced on September 20 to a three-year suspended jail term and fined THB150,000 (€3,862). He was found guilty of criminal defamation and violating the Computer Crime Act after contributing to a 2013 report by Finnish NGO Finnwatch called “Cheap Has A High Price” that exposed labour rights violations at pineapple processor Natural Fruit Company Ltd.

It prompted a wave of protest from campaign groups, with Human Rights Watch saying it would have a “serious chilling effect” on workers’ rights monitoring in Thailand.

Gurney continued: “We’re not trying to bicker with companies – we’re trying to change behavior gradually. What we need a complete change of management system.”

The European Parliament yesterday called on the Thai government to “ensure that the rights, including the right to a fair trial, of Andy Hall and other human rights defenders are respected and protected and that the promotion and protection of human rights are not criminalised”.

Hall told RI he’s appealing the judgment that he called “factually incorrect and legally incorrect”.He explained how the organisation often gets enquiries from investors who are, in his words, “simply looking for information to assess their risk”. He continued: “My message to investors: invest to fund solutions. Not just look at risk and pull out.”

At PRI in Person Hall spoke on a panel on human rights in the seafood supply chain alongside Gurney in a session moderated by Peter van der Werf, Engagement Specialist at RobecoSAM. Neither the PRI or RobecoSAM would comment on the case.

Finnish MEP Heidi Hautala of the Greens/European Free Alliance grouping, who invited Hall to the Parliament, said: “Andy Hall should have been awarded for revealing the workers’ abuses. This court decision can lead to further silencing of human rights defenders in Thailand.”

Saying it is “committed to the promotion and protection of human rights” the Thai government reiterated that the cases against Hall were “initiated by a private entity against another private entity”.

“The Thai Government is not a party to any of these cases and does not have any influence over the judicial process which is independent, separate and distinct from the executive branch.” It added the judicial system adheres to the “utmost integrity, neutrality and transparency” and that Hall is fully entitled to the right to a fair trial and he can appeal the court decision.
“We are aware of our duty to ensure that human rights defenders can carry out their work in a safe and enabling environment.”