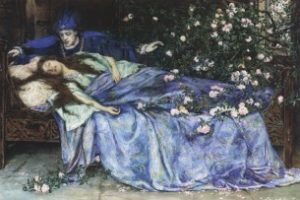 Versions of the Sleeping Beauty fairy tale have been told since medieval times. After pricking her finger on a spindle cursed by the evil fairy, the princess falls into a deep sleep. A good fairy sends everyone else in the castle to sleep as well, while a forest of trees, brambles and thorns encircle the princess’ castle as she waits for 100 years and the kiss of a prince to awaken her from her curse.
We fear that the investment world is trapped in its own 100-year slumber of our own making. We weren’t put into the deep sleep by an evil fairy. Instead through our own cumulative decisions we found ourselves favouring passivity and becoming more disconnected from society.
But we cannot rely on a prince to wake us up from our slumber.
There is, though, dormant beauty in investment: investors have the power to shape economies and society. The question is whether we can rouse ourselves, because we need to, and quickly!
We’ve deliberately chosen the Sleeping Beauty fairy tale to illustrate the situation that investors find themselves in for a very simple reason: people think in narratives.
Whilst in the investment world we are happy to wrap ourselves in jargon and technical concepts, in society investment is seen in very simple terms. The impact of investment, and trust in those who make investments is core to the way society views us.
As the Edelman 2017 Trust Barometer demonstrates, we are now in an era where trust is in crisis. Edelman’s research reveals that the gap between the mass population and informed population across 28 countries is widening. The mass population, which consists of 85% of the population believe the “system is broken”.
We have seen the manifestation of broken trust in elections around the world, from Trump to Brexit, the rise of Le Pen in France and the fragmentation of voting in Spain.Some investors may feel that this is another case of “not my problem.” This mindset is the core of what we believe must change. If it persists it will invite increasingly desperate governments to regulate and tax investment and to increasingly take over the role of asset allocator in the economy. There are already many examples where this is happening.
Many would say that it is unfair that investors are being tarred with the same brush as politicians. Over the last decade we have seen an incredible amount of positive actions driven through the establishment of the United Nations-backed Principles for Responsible Investment which has been able to coalesce a diverse and dispersed group of investors under the one umbrella. It is to the PRI Principles that we believe we need to return to work out what to do to address the risk that declining trust poses to investors. Often overlooked, the preamble to the PRI Principles reads “we also recognise that applying these Principles may better align investors with broader objectives of society.” The insertion of this clause was a very deliberate act by the original drafters, which include one of the authors of this article, but it did not happen smoothly. In the fourth and final meeting to agree the Principles, convened by the United Nations in Boston in January 2006, a battle over the use of the word “social” and or “society” in the preamble very nearly brought the 9-month long negotiation, involving a significant number of the world’s largest asset owners, crashing down. Decades old differences, including cultural and political sensitivities most apparent between those North American and Continental European investors present, over the role of investors in societal matters bubbled up on the morning the PRI draft was to be signed-off. Deft chairing through hard conversations by the meeting chair, Colin Melvin, former Chair of Hermes EOS, resulted in the compromise wording that formed the finally agreed PRI preamble. The PRI’s birth

was not easy. Over the last decade there is no doubt that investors have improved responsible investment practices. But collectively the industry has been very poor at telling its story.
When investors do produce responsible investment reports they are often focused on talking to an internal, informed audience – not to society at large.
What then should we be doing? This is a question that we have been asking ourselves over the last two years.
The first thing we concluded is that we have to stop just talking to ourselves and start talking to communities. So that is what we have been doing. From the Sahel to Mexico City and on to Oslo, New York and Sydney, we have opened up new conversations with groups that have no familiarity with institutional investment and, on the flip side, with investors in danger of a deeper disconnection from the communities they ultimately serve. The positive news is that there is a strong appetite for change. Communities are very open to engagement and have many urgent issues that they want help to resolve. But there are no easy solutions.
And this is the issue for investors. If we want to reduce the risk that comes from declining trust then we need to become part of finding the answers.
One of the challenges we have identified in emerging economies is that listed businesses are struggling to wade through the fiesta of reporting standards and understand the links between reporting and value creation. We are working to support businesses to identify what and how to report that will attract institutional investors that have a focus on long-term value creation onto their share registers.
We are also working with local authorities to establish community bonds that can provide an alternative financing mechanism to renew and develop aging community facilities. Innovations such as credit enhancement and securitisation that were originally developed by the finance sector can be utilised in new ways that open up community assets as a new institutional investment asset class.
In the Sahelian countries across Sub-saharan Africa we have initiated a conversation exploring how innovative, debt-based financing structures might catalyse a much-needed scaling up of irrigation optionsfor farming communities. This conversation will “land” at the World Economic Forum, Davos, in January 2018 where we will seek to bring the voice of the communities in the Sahel to policy-makers and investors gathered there. After ten years of progressively developing responsible investment practices, ably led by the PRI, it is time for investors to take the next step. We now have the institutional structures that enable investors to improve responsible investment practices globally. The next step is to establish the institutional structures that support dialogue between investors and society.
This will take us outside of our comfort zone and in some cases involve difficult conversations similar to the aforementioned one required to bring the PRI “kicking and screaming” into the world. This preparedness for openness and transparency will be the mark of success.

This will take us outside of our comfort zone and in some cases involve difficult conversations.

There are many benefits if investors embrace this challenge. The first is that we collectively reduce political risk. But the second, and perhaps more meaningful in the long run, is that we will open up the possibility of new investment opportunities that can deliver risk adjusted investment returns, but also deliver significant environmental, social and economic benefits to society.
As big believers in the power of narratives, we will be telling the story of the conversations that we are having outside of the investment industry.
We invite you to join us in the conversation and join us in working with society to find solutions to complex problems.
It is time for Sleeping Beauty to wake and once again become part of society.

Paul Clements-Hunt, Michael Marais, Valborg Lie and Gordon Noble, are FenElpi Partners, an advisory firm set up to take on the challenge of finding solutions through a collaborative dialogue between investors and society.