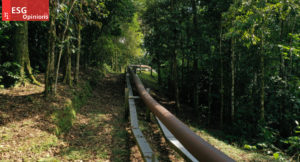 A recent World Economic Forum panel about the Amazon’s transition to a sustainable bioeconomy asked what financial instruments would be needed to harness its potential to benefit people and nature.

But before we decide on how to prioritise nature-positive financial mechanisms – such as debt-for-nature swaps and debt forgiveness – we must first ask: What needs to be dismantled?

If we are to protect the Amazon, no financial instruments require dismantling more urgently than those that support the global trade in crude oil. Bank finance, both transaction-based trade finance approaches and loans and revolving credit facilities (RCFs), are its lifeblood, providing billions of dollars that create liquidity for oil traders to make deals, drive demand and even fund new oil expansion. Banks who support the oil trade risk overshooting the carbon budget and financing corruption.

The Ecuadorian Amazon rainforest is increasingly threatened by oil production financed in this way. Last March, for example, Ecuador announced a drilling campaign in and around Yasuni National Park, an area of unparalleled biodiversity and home to uncontacted indigenous peoples.

24 new oil wells were drilled, requiring clearing of intact forest to create roads and the area is the largest oil project in the country’s history. The climate implications of daylighting these reserves are staggering. We estimate that almost 300 million metric tons of carbon dioxide – equivalent to yearly emissions from 77 coal-fired power plants – would be emitted from gasoline production alone.

This is a far different fate to the one envisioned in 2013, when the Ecuadorian government petitioned the international community to pay them to keep the oil in the ground. Even when only developed reserves are taken into account, the world is going beyond the carbon budget required to stay within a 1.5℃ warming scenario. Tapping new reserves, fueled by bank finance, should not be considered congruent with Paris targets or with net-zero 2050 strategies.

Reports from Ecuador and the Republic of Congo suggest oil traders provide agents close to government officials with bribes and kickbacks to sign deals that result in this kind of exploitation. Investigative journalists allege that the total revenue siphoned off the Ecuadorian government by oil traders has topped $2bn over the last decade.

To make these billions, oil traders look to banks to back them through trade financing and credit. Back in 2020, we monitored US crude oil import data to identify which banks were behind the trade financing of Amazon oil, and identified ING, Credit Suisse, BNP Paribas, Natixis, UBS and Rabobank as the top six providers. Transaction likes these seem very much at odds with ESG policies and after Stand.earth and Amazon Watch released this finding, several of the banks committed to reviewing and/or ending their involvement.

However, transaction-based approaches form only part of the finance for Amazon oil production. RCFs indicate much deeper pockets of financing than seen by customs data alone. RCFs for ‘working capital’ can be used by oil traders to finance trades, oil producers, and other traders in the Amazon.

For example, global oil trader Gunvor, which is actively selling Amazon oil to California, renewed a $1.225bn revolving credit facility in November 2020. The banks signing up to this included Rabobank, Credit Suisse, ING, Natixis and UBS.

What does it say about the state of our financial system, and its ability to support the #BuildBackBetter initiative or the World Economic Forum’s Great Reset, when bank finance is still supporting a system that benefits traders over the financial security of nations like Ecuador? Debts in Ecuador now amount to 67% of GDP, due in part to a legacy of bad oil deals, high fixed-shipping costs and expensive borrowing brokered by oil traders.

Banks need to take an in-depth look at their finance and investment portfolios in the Amazon and consider the substantial financial risks of supporting commodity traders with a history of corruption. For example, when Singapore oil trading giant Hin Leung Trading Pte. went bankrupt this year, 23 banks were left holding almost $4bn in unpaid loans.

Several banks, including ABN AMRO, recently indicated they might leave the commodities trade all together, while the likes of Rabobank are considering a significant scale-back of their commodities trading. If others follow, credit will get tighter and more expensive and small oil traders will not survive.

Bank finance is a key enabler of the relentless commodification of the world’s resources, which must slow if we are to ease the pressure on our environment to keep providing raw materials. The scaling back of oil trade finance based on banks’ ESG and climate commitments should be an important step in any sustainable bioeconomy plan for oil producing countries in the Amazon.

Banking regulations must also tighten, and Switzerland, the epicentre of commodity brokerage, must take global responsibility and hold multinational corporations based in the country to account. Only once we have a system in place that prevents harmful financing activities, can we turn our full attention to nature-positive financial mechanisms.

Ecuador is symbolic of the struggle across the Amazon between oil and gas expansion and threats to climate, biodiversity and indigenous rights. So long as financial instruments are in place that support the oil industry, expansion will continue. We must retract the harmful practices of the past before we can truly begin to build back better.

Angeline Robertson is an Investigative Researcher at Stand.earth Research Group