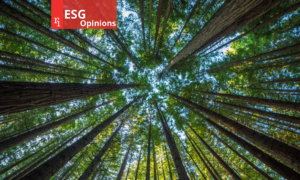 The Covid-19 crisis has slowed the global economy – but not the loss of tropical forests.

Transportation-related greenhouse gas (GHG) emissions have dropped sharply in recent months due to stay-at-home orders across the US and around the world. Meanwhile, the clearing and burning of carbon-rich tropical forests for cropland and cattle grazing has continued, and even accelerated, in the world’s largest rainforest. From January to April of this year, Brazil’s Amazon rainforest lost an estimated 464 square miles of tree cover, an area roughly the size of Manhattan and a 55% jump from the previous year.

Last year, the world lost an estimated 9.4 million acres of tropical primary forests, areas of mature forest that are especially important for biodiversity and carbon sequestration. That’s the equivalent of losing a soccer field of primary forest every six seconds.

For institutional investors worried about climate-related economic disruptions, deforestation – and its role in warming the planet – should be of major concern. Just as investors are increasingly engaging with the largest energy and transportation companies to lower their GHG  emissions and support a net-zero emissions future, they should be doing the same with large food and consumer companies whose massive supply chains for beef, palm oil, soybeans and paper are driving deforestation-related emissions.

That’s the core message of the Ceres’ Investor Guide to Deforestation and Climate Change, a new framework that outlines why and how investors should take action to eliminate deforestation-driven climate risks across their portfolios.

Deforestation contributes to climate change – and its associated economic and financial risks – in multiple ways.

Forests are typically carbon sinks, areas that absorb more carbon than they emit, due to the ability of trees and soil to store immense amounts of carbon. However, when forests are felled and burned to free up space for agricultural production, much of that carbon is released as carbon dioxide and other GHG emissions. The agricultural activities that replace forests emit additional GHGs due to livestock grazing and fertilizer use. Finally, deforestation causes changes to local and continental climates because of the way forests drive movements of air, water and heat. In parts of the Amazon, deforestation has already delayed the rainy season by two weeks.

Just as investors are engaging with the largest energy and transportation companies to lower their emissions, they should be doing the same with large food and consumer companies whose massive supply chains for beef, palm oil, soybeans and paper are driving deforestation-related emissions

These negative consequences of deforestation pose material financial risks to investors. As the world begins to shift towards a net-zero emissions economy, companies that do not eliminate deforestation from their supply chains will face reduced market access, reputational risks and even legal sanctions due to increasingly stringent policies, regulations and investor expectations. Additionally, the physical effects of climate change will disrupt supply chains and increase production costs. These risks are especially severe for companies sourcing agricultural products – the very companies mostly likely to have deforestation in their supply chains.

Not only does eliminating deforestation reduce investors’ exposure to these risks, it also presents substantial opportunities. The combined effect of eliminating deforestation and restoring previously cleared land could provide 16-30% of the climate mitigation needed to limit average global temperature rise to 1.5-2℃ by 2100. That’s nearly three-quarters the mitigation potential of all renewable energy technologies combined.

Until recently, many investors overlooked deforestation as a priority issue for engagement with portfolio companies. But a growing group of investors are beginning to act on deforestation as a major driver of climate change. Last September, 251 institutional investors with more than $17.7trn in assets under management called on companies to implement no-deforestation policies across their supply chains.

To support these investors, especially engagement specialists new to the topic, the Ceres Guide provides an engagement framework that investors can use to assess how companies in their portfolios are mitigating the risks associated with deforestation. Investors can encourage companies to:

1. Set ambitious targets to reduce GHG emissions—including those from deforestation

Institutional investors are increasingly expecting companies to set ambitious GHG emission reduction targets as part of their strategy to manage climate risks. Currently, few companies include emissions from deforestation in their targets, due in part to a lack of detailed guidance for doing so. With new guidance to be released in 2021, investors can expect a shift towards inclusion of deforestation emissions in climate targets.

2. Develop and implement no-deforestation policies as part of their climate action plan

For companies that produce or source commodities associated with destruction of forests, eliminating deforestation from their supply chains should be a linchpin of their strategy to address climate change.

A robust no-deforestation policy is one part of the solution. But investors also want to see that companies are taking concrete steps to implement those no-deforestation policies by: establishing traceability in their supply chains; developing monitoring and verification mechanisms; and providing financial support to producers to incentivize forest protection.

Of the 500 companies with commitments to address deforestation, only a handful currently disclose on quantitative progress towards their targets. Investors can press companies for disclosure against two key reporting metrics related to their use of commodities associated with deforestation:

As the Ceres Guide makes clear, now is the time for bold and urgent investor action on deforestation. Progress on the goals of the Paris Climate Agreement is far behind schedule, and a huge shift in wide-ranging corporate and human activities is needed immediately.

They can also help to end the climate crisis.

Dr. Meryl Richards is the Director of Food and Forests at Ceres, and author of the Ceres’ Investor Guide to Deforestation and Climate Change