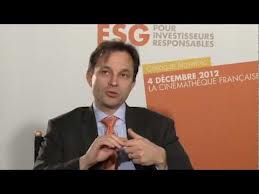 More than ever, economic growth and its corollary, job creation, stand as the central theme of the European Commission. Unfortunately, it looks like sustainability is, at best, a satellite part of the growth agenda of the new Commission. Responsible investors, as financiers and shareholders sharing various sustainability-related concerns, have a key role to play in making sure that policy-makers adopt frameworks striking the right balance to create a regulatory environment in which EU companies can thrive while actively contributing to addressing the broader sustainability challenges.
Jean-Claude Juncker, the European Commission President, clearly stated during his 2014 campaign and after his election that presenting “an ambitious Jobs, Growth and Investment Package” was his top political priority. One of his first actions once elected was to create and appoint a dedicated Vice-President, Jyrki Katainen, to lead that charge and coordinate the Commission’s efforts on that front across the different Directorate Generals (DGs). Katainen’s letter of mission bears no real mention of sustainability.
Another interesting move was the addition of sustainable development to the portfolio of Frans Timmermans, a former Dutch diplomat, and First Vice-President, in other terms number two of the Commission. This was added to his initial portfolio after harsh negotiations with the Parliament as Socialist MEPs were concerned about climate policy coming under the responsibility of Miguel Arias Cañete, the first single Commissioner supervising both climate and energy and who faced controversy due to his links with the oil industry.
Mr. Timmermans is also in charge of the Commission’s “better regulation” agenda, which is meant to lead to the “removal of unnecessary red tape”. Some stakeholders believe that this masks an attempt to deregulate rather than to diminish unnecessary EU bureaucracy. This is the point recently made by 20 Brussels-based civil society organisations in a letter to Mr. Juncker and Mr. Timmermans. An unprecedented review of 130 pending legislative proposals left over from the Barroso Commission was undertaken by Mr. Timmermans services last Fall. The review was welcomed by Business Europe, the trade body for EU businesses in a letter supporting ditching or alleviating legislative proposals around atmospheric pollutants, gender equality in boards, shareholders rights, conflict minerals, product safety or circular economy for instance. The entire circular economy package was controversially officially withdrawn, alongside 72 other proposals on the Commission “kill list”. It was anticipated to generate 580,000 new jobs, making Europe more competitive while reducing the demand for costly and dwindling resources. The Commission says that a new package will be suggested in 2015. Will it?
Nobody doubts that growth is urgently needed in Europe. Certainly not investors. Yet, the question that is posed today is: what kind of growth?For Eurosif, its constituents and most probably you, readers of Responsible Investor, the answer is clear: Europe’s growth and job creation agenda cannot be decoupled from the broader sustainability agenda. Eurosif has been promoting, for more than a decade, a sustainable growth agenda where financial markets would play a key role.

“We invite all European SRI players to work with us.”

Today, the signals we get from the new Commission are unclear and somewhat worrying. It is time for the European RI community to seriously ramp up its level of public policy engagement to secure the type of growth it wants, promote its values and interests.
In doing that, it is critical that the industry stands united. French people say “l’union fait la force”. This, in my mind is lacking in the RI community, at least on the EU front. Too often, I have noticed a lack of coordination between the various (good) initiatives that have emerged over the years to promote specific themes of interest to the RI industry. This “silo-isation” has sometimes led to unnecessary duplication of efforts, sub-optimal impact or even unclear messages.
In 2011, Eurosif made a strategic decision to move to Brussels (from Paris) to focus on EU policy-making as a key change agent. Informed by its members and affiliates, it is seeking to influence the policy debate by alerting and educating EU policy-makers about the role that responsible investment can play in helping them to achieve some of their policy objective such as Agenda 2020 or the transition to resource-efficient, low carbon economies. It is doing so as the only Brussels-based, Europe-centric and non-thematic RI membership organization.
The first tangible results can now be seen and I believe that Eurosif has some track record in helping to achieve these. Two recent examples are:
A Directive on non-financial and diversity disclosure was adopted in September 2014, marking a key milestone for sustainability and SRI. Since 2009 Eurosif has been lobbying for a stronger corporate disclosure framework. These efforts intensified in late 2011 through 2014 as Eurosif got involved in the preliminary EU workshops on the topic before the EU Proposal was issued. After the publication of the Proposal in Spring 2013, we ran an intense lobbying and supporting campaign, reaching out to other investor-led groups and stakeholders to ensure the progress of the legislation and encourage collaborative public engagement on this topic.
The Commission issued a proposal to revise the Shareholder Rights Directive in Spring 2014, containing several demands supported by Eurosif and its affiliates. As early as in 2012, Eurosif was also involved in preliminary discussions with DG Markt (now DG FISMA) on the revision.
The legislative process is about to enter into its final phase, the triangular negotiations for a final compromise between the Commission, the EU Parliament and Council (so-called “trialogues”). Eurosif is currently actively lobbying MEPs to ensure that the core elements of the Proposal are progressed despite strong business opposition and a relative lack of championing by mainstream investor organisations.
While progress is acknowledged, it is far from being sufficient. With a new Commission, a new flagship initiative (Capital Markets Union) and very little sustainability in the horizon, now is the time to speak up. We invite all European SRI players, other RI membership organisations and think tanks to work with us on building policy platforms, actions and coalitions that could be mutually beneficial and certainly beneficial to the whole industry and society at large. We are ready to support and amplify others’ efforts where we can. Our respective memberships often involve significant overlap.
This could simply start with more efficient information sharing mechanisms, such as regular “catch-up meetings”. Several Brussels-based representations have already understood these meetings, such as the so-called Green10 (top 10 NGOS).Why not setting-up similar meetings for the RI “ecosystem”? And why not create, and brand, joint efforts under a “European Coalition for Responsible Investment” umbrella?

Such a coalition would be highly visible and sends strong signals to EU policy makers. Again, Eurosif would be quite happy to facilitate.
I am convinced that having a European RI community more engaged and coordinating its efforts in public policy is the way forward. I strongly encourage readers to read the recent “Case for Investor Engagement in Public Policy” co-written by the PRI, UNEP Inquiry and UNEP-FI. Collectively, we can ensure that, to paraphrase President Juncker, “ the European Union that is bigger and more ambitious on big things, and smaller and more modest on small things “.
Please contact me if you wish to engage or exchange views about this via email, I would be interested in knowing your views and suggestions.