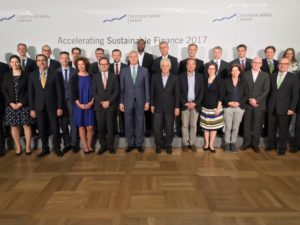 The Sustainable Finance Initiative has been launched by exchange operator Deutsche Boerse with the support of the Federal Ministry of Finance and development bank KfW.

Supporters have signed what’s being termed the “Frankfurt Declaration” – a joint declaration of intent to build sustainable financial sector infrastructures.

The initiative was launched at an event today with speakers from the Bundesbank as well as Goldman Sachs, the UNEP Inquiry, Allianz and Deutsche Bank.

The aim is for the conference to be established on a permanent basis. Individual working groups will be created and another event is scheduled for the first quarter of 2018.

“The participants in the Frankfurt Sustainable Finance Initiative aim to actively work together on the basis of their own core business, towards implementing sustainable milestones, such as the United Nations’ Sustainable Development Goals, realisation of the Paris Agreement and also the design of the green finance focus of the German G20 presidency,” the exchange said in a statement.

The idea of the Declaration is drive the “holistic mobilization” of sustainable financial market infrastructure (link).

Frankfurt is “fully aware of the role it will play in the future of the international capital markets,” said CEO Carsten Kengeter. Although not mentioned specifically by the exchange in this context, Brexit has triggered a race to take on some of London’s role as a finance centre.It is a “strong and very welcome signal” according to Dr Michael Meister, Parliamentary State Secretary, Federal Ministry of Finance. But the move comes as Kengeter is under investigation for insider trading relating to the failed merger with its London counterpart – allegations that he and the company have denied.

Signatories to the Frankfurt Declaration – not to be confused with the 1951 declaration of the same name which denounced capitalism – include some of the largest names in German finance.