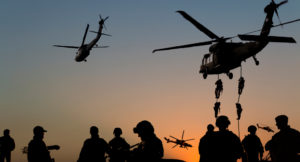 A group of 145 French parliamentarians from both the ruling En Marche! party and opposition LR (Les Républicains) party have signed a motion aiming to avoid the French defence industry being labelled harmful by the EU’s Ecolabel’s proposed criteria, which they claim would unfairly penalise the sector.

At a hearing yesterday (December 8) of the French National Assembly’s European Affairs Commisssion, Jean-Louis Thiériot, French parliamentarian for the Seine-et-Marne region and a member of the country’s Defence Commission, said a proposed fourth version of the Ecolabel rules would exclude from its recommendations any companies with more than 5% of their business in armaments.

He said this would exclude all defence companies from any related sustainable or social development investment, depriving the industry of capital, despite, he said, in his view defence security being one of the most socially important.

Draft ecolabel rules propose that companies deriving more than 5% of revenues from “production and/or trade of conventional weapons and military products for combat” should be excluded from the label.

Thiériot called for the defence industry to be excluded from any mention in the Ecolabel.

The Ecolabel is a key initiative under the EU Action Plan to focus on greening products in the retail investment market. After numerous delays since the project kicked off in 2019, RI reported in September that the European Commission was working to bring more clarity to the planned label in relation to its alignment to the EU Taxonomy.

This could also prove to be a sticking point for the defence industry, as recently reported by the Financial Times. This is because the draft proposal for a Social Taxonomy (developed by the EU Platform on Sustainable Finance, a group of advisors to the EU on the Taxonomy), outlined the potential that “harmful sectors or activities such as weapons, gambling and tobacco cannot qualify as socially sustainable”. It also says, however, that “internationally agreed conventions on certain kind of weapons would be used”.