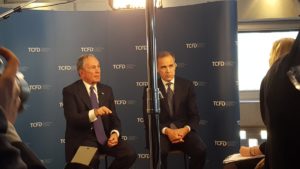 Just under a year ago, the launch of the Financial Stability Board’s high-level climate disclosure task force’s first report was hailed as a ‘seminal day’ in the battle to combat climate risk.
The panel (officially, the Task Force on Climate-related Financial Disclosures or TCFD) was driven by Bank of England Governor Mark Carney and is headed up by media tycoon Michael Bloomberg.

That first report initiated a process that led to the TCFD’s initial recommendations last December, which were then opened for a 60-day consultation. That consultation closed this week, another milestone. And it is clear that we are now well into the ‘nitty gritty’.

Here Responsible Investor looks at some of the responses from some of the key players. This is not intended as an exhaustive look at all the responses in detail, rather it presents a flavour of some of the main points. The survey was administered by PwC’s Research to Insight market research arm.

Among the nuggets is the Principles for Responsible Investment (PRI) saying it plans to align its reporting framework with the TCFD. The CDP – saying it is more than just a “facilitator” for the TCFD and is instead the markets’ “institutional memory” – clearly wants mandatory disclosure. The Global Reporting Initiative seeks a “direct collaboration” with the TCFD while the Network for Sustainable Financial Markets focuses on broader systemic issues. The World Federation of Stock Exchanges worries about burdensome disclosure.

The TCFD will share the results from the consultation next month and deliver an updated report to the FSB in June ahead of its presentation to the G20 Summit on July 7-8.

The PRI (whose chair Martin Skancke is a TCFD member) says its submission is informed by feedback from its signatories. It will provide practical guidance to PRI signatories to advance investment practices in applying the Task Force’s framework in company and portfolio- level analysis. The body will convene collaborative investor engagement with companies to promote the FSB Task Force recommendations. “We will also convene investor input and collaboration with policymakers on implementation across the G20,” it says.

It continues: “We will adjust and align the PRI Reporting Framework with the FSB Task Force’s supplemental guidance for asset owners and investment managers, subject to the final guidance provided by the Task Force.”

The PRI added it encourages an “enhanced” accounting disclosure framework by the International Accounting Standards Board (IASB) to build a uniform approach towards reporting on material climate risk in financial reporting.  It recommends that policymakers, the PRI and reporting bodies “work together towards convergence and reduction in the total number of parallel reporting frameworks”. Also calls for the International Organization of Securities Commissions (IOSCO) to adopt consistent international listing rules on disclosure of climate risk. It encourages stock exchanges to incorporate the TCFD framework as the London Stock Exchange has done recently. And the PRI wants supplemental guidance to promote disclosure by service providers such as investment consultants.CDP

The environmental data body says the information will not be useful to investors “unless they are able to work with a full set of comparable information, generated as a result of universal disclosure by companies”.

“As a result of our direct experience,” the CDP says, “of working to encourage companies to disclose on a voluntary basis, we are advocates of mandating and enforcing universal company disclosure to obtain consistent, comparable and high-quality information and reach companies who resist voluntary norms.”

Scenario analysis is a “top priority” and the CDP recommends the setting up of a “scenario warehouse” where different parameters and assumptions can be shared.

Points out that the TCFD recommendations do not specify who will be responsible for enforcing the quality of reporting, and how companies will receive feedback on the their disclosures. “CDP is committed to a sector-based disclosure strategy embedding the TCFD recommendations.” The London-based body adds: “We are uniquely placed to provide a comprehensive metric analysis platform with built-in flexibility for individual tailoring for organizations, with the capability for companies to better understand how they are benchmarking against their industry relevant peers. Investors are increasingly asking for this sector level data and benchmarking to drive investment decision-making.”

It goes on: “We are more than just a facilitator for the TCFD recommendations, we are the markets’ institutional memory in the drive for better, more effective disclosure and climate change performance.”

The IGCC and AIGCC say it would be helpful for the TCFD to provide demonstrative examples of what complete disclosures might look like and add quality of investor disclosure is “highly dependent” on the quality of disclosure by investee companies, hence “strong and comparable” disclosures are required at company level. And they argue the TCFD’s decision not to endorse specific reporting metrics “may limit the recommendations’ usefulness to investors” – which could lead to a “continued or increased” lack of consistency in disclosure.

Until strong and comparable disclosures are fully mandatory or a reality, risk assessment at the listed entity level will continue to be “extremely challenging”.

“We encourage the Task Force to support the G20 and FSB to play a strong role in encouraging the use of comparable reporting indicators in different jurisdictions. We also encourage the TCFD to reform the Task Force, at minimum, for the purpose of creating annual reports on progress by corporations and investors in implementing the TCFD’s recommendations.” They note how annual reports on implementation has been a crucial element to the success of the FSB’s Enhanced Disclosure Task Force on banking.

They conclude: “The number one driver for asset owners and managers to implement the disclosures would be to have complete, meaningful, reliable and consistent data across companies and sectors.

The investor groups add that the G20 could and should play a key role in making solid and comparable data available, but stock exchanges and central banks could really contribute to advance climate disclosures.

“We encourage the G20, and the FSB, to continue leading in the implementation phase of the recommendations as well as in the evolution of climate disclosures. The G20 could designate a body – for example the Task Force, the Green Finance working group or an equivalent existing or newly developed body G to oversee and monitor implementation.”

“We call for establishing direct collaboration between the TCFD and GRI to explore how the GRI standards can be used as a basis for the implementation of the TCFD recommendations.” Wants to avoid “the existing perception of reporting fragmentation and fatigue”.

The SFM called on the TCFD to address systemic disclosure concerns. Its submission addresses climate change reporting as a component of business strategy development “from a systems thinking perspective” – arguing it is part of the fundamental short-termism problem: “In the end this is about more than just disclosures and reporting”. It calls for business leaders with “higher levels of cognitive thinking, systems thinking and crystallized intelligence”.Asset Owners Disclosure Project

The AODP called for the TCFD to define the metrics and data that investors and stakeholders (including pension fund members) need to assess companies. It calls for consultants, ratings agencies and proxy advisors to be brought into the scope of the framework.

Said the lack of translation of the AODP methodology (“an accepted standard in the marketplace”) into its guidelines a “serious omission”. Called for the existing databases for carbon risk and emissions to be integrated. The AODP finds the opacity equal to that of the collateralized securities issues of 2007-9. Indeed, the body, headed by Julian Poulter, disagrees rather with the TCFD’s remit, saying it misses “critical systemic issues”. Called for the creation of a carbon futures market that would allow the “forward trajectories used in scenarios to have a proper market price point”.

“Simply requiring companies to disclose more information without assessing the overall disclosure burden not only reduces the likelihood that companies will disclose, but may undermine the relative attractiveness of public markets, resulting in a reduction in corporate transparency,” the stock exchange body says. CEO Nandini Sukumar cautioned against “imposing an overly onerous disclosure burden, particularly on listed companies”.