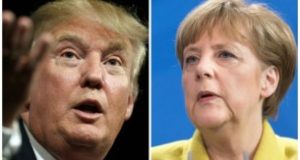 US President Trump and German Chancellor Angela Merkel meet for the first time tomorrow (March 14) in a hotly anticipated summit. In a series of meetings, they are expected to cover bilateral issues including mutual interests around energy and climate change. Merkel has previously indicated she intends to raise climate change with Trump, saying: “Of course I’ll say that I believe that climate change is certainly caused by humans – and we’ll want to see if the position there develops.” Trump’s administration, however, is showing ominous signs that it will row back on environmental regulation and potentially withdraw from the COP21 agreement.
The discussions come ahead of the March 17th meeting in Baden-Baden of G20 finance ministers and central banks where the report by the Taskforce on Climate related Financial Disclosure (TCFD) is likely to be on the agenda: Link to G20 site
The Trump/Merkel talks are an important precursor to the upcoming G20 Summit being hosted by Germany in July. And the summit is important for ‘green finance’ because of the onus that China put on it by placing it in the action file of G20 policy under its presidency last year. The move was significant enough that it will be hard to top for Germany, the nation that has followed in leading the G20 this year.
In cooperation with the UNEP Inquiry, China heralded green finance by supporting the formal establishment of the Green Finance Study Group (GFSG), placing green finance onto the agenda of the powerful finance track overseen by finance ministers and central bank governors, and endorsing the G20 Green Finance Synthesis Report, a consensus document and guidebook on voluntary options for mobilising private capital for green investment (see also ESG Magazine 5 a few lines on green finance made it into the Hangzhou Communiqué finalising China’s G20 presidency, but even if voluntary, the world’s biggest economies have recognised the importance of scaling up green finance. Such positions are expected to cascade into national regulations.
Having taken over the G20 presidency, expectations were that Germany could write the next chapter of green finance and maintain momentum. But, German elections this year collide with the G20 tenure, meaning it has less spare time to wield influence. It is also dealing with political challenges from Brexit and Trump himself, both riding a rising wave of populism. This makes it uncertain how much Germany will be an enabler of last year’s leap forward in green finance. Indeed, media reports based on a draft of the text for this week’s finance ministerial meeting suggest governments could be aiming to encourage as much private funding as possible for climate change instead of government pledges. Bloomberg reports that this is a significant shift from what finance ministers stated in a communiqué from 2016, in which they urged governments to quickly implement the Paris Agreement. It reports that the draft it has seen does, however, establish a goal for G20 nations to phase out fossil fuel subsidies by 2025.
Observers have mixed feelings about what the talks could lead to, and how far Germany can push the envelope.
Celine Bak, co-chair of the Think Tank 20 (T20) taskforce on climate policy and finance, says: “The US is one of the most successful countries in environmental goods and trade globally. I think that President Trump will quickly come up to speed on how the solar and wind industry have thrived in the US, and it’s unlikely that he’ll

forsake those jobs.” Against the Trump challenge stands a global accord on inclusive and sustainable growth confirmed with the ratification of the Paris Agreement in 2015. This is not only reflected in the recently published 2016 sustainability strategy of Germany, through which the nation pledged to become “one of the world’s most efficient and environmental-friendly economies by 2030”, according to environment minister Barbara Hendricks. It is also reflected in the backing of the topic by the B20, the G20 mimic in the business world.
Stormy-Annika Mildner, the B20 Sherpa leader and in charge of foreign economic policy at the Bundesverband der Deutschen Industrie (BDI), says that inclusive, sustainable and future oriented growth is the overarching theme of the B20, and green finance constitutes an important element to achieve it. With the topic of sustainable growth entering the finance track only last year, the German finance ministry has just begun to grapple with it. Bernd Wagner, speaker on sustainable finance topics in the high-tech forum advising the German government and chairman of the Union for Environmental Management and Sustainability in Financial Institutions (VfU), explains that the topic is still in many respects quite new and unfamiliar to the German finance ministry, which is used to living in a very separate world from the environment ministry. However, Wagner says, he is convinced that the finance ministers will learn rapidly: “They will see that the world around them is already aware of this topic …. they will realize fast that this has business relevance: the divestment movements by the Norwegian Pension Fund, Allianz, AXA and other big ones. They will realize the importance of the matter and that they are betting on a risky horse with carbon-intensive investments, understand that this is a bad idea and then change path.” Four working groups are furthering green finance under the German G20 presidency: the Energy Efficiency Financing Task Group (EEFTG), the Energy and Sustainability Working Group (ESWG), the GreenInvest Platform, and the Green Finance Study Group (GFSG), which is part of the influential G20 finance track.The GreenInvest platform is aimed at engaging developing countries in the mainstreaming and mobilisation of green finance by focusing on greening foreign direct investment (FDI); the role of financial technology (‘fintech’) in advancing green finance, and enabling developing countries to effectively participate in international cooperation to accelerate green finance.
The green finance topic of the Chinese and British-led GFSG under the German G20 presidency is environment and climate risks in the finance sector. The topic was selected as a sub-theme to the two main German G20 presidency themes “digital” and “resilience”. While last year was a “landscaping year”, green finance in the GFSG has this year entered a “technical” stage, says Simon Zadek, UNEP’s co-Director of the Inquiry into Design Options for a Sustainable Financial System. Joachim Wuermeling, member of the Executive Board of the Deutsche Bundesbank responsible for capital markets, explains that under the German G20 presidency the GFSG’s work will capitalise on the ability of financial markets to assess and price risk-return expectations. The GFSG addresses the question of why financial markets do not seem to adequately fulfil these functions with regard to climate change. He believes this could be due to a lack of comparable, reliable and accessible environmental information, or of methods and instruments to assess environmental impact. Therefore, complementary to the work of the industry-led FSB Task Force on Climate-related Disclosure (TFCD), the GFSG is examining ways of improving the accessibility of publicly available environmental information for the financial sector. Furthermore, the GFSG will identify existing approaches to risk analysis of environmental and climate aspects applied by the financial industry. Other green finance topics that will be the focus of discussions during the German G20 presidency are the definition of green finance, green infrastructure investments and sustainable value chains, as well as green finance disclosure and risk management of corporates. The latter is part of the TFCD report, which is currently under public consultation and will be presented to the G20 summit in Hamburg in July.

For that G20 summit, a range of outputs can be envisaged: Wuermeling says that, for the Bundesbank, the “optimal result” of the GFSG´s work and the work of the FSB–TCFD during the German G20 Presidency would be “to make a robust and consistent set of basic information on environmental and climate-related risks accessible to financial players and to help them develop approaches and instruments to use this data.” Overall, looking at the broader global development, he expects that ESG or climate as a topic will increasingly evolve from niche to mainstream. Peter Wolff, Head of World Economy and Development Financing department at the German Development Institute (DIE), which is co-leading the T20 together with the Kiel Institute for the World Economy (IfW) under the German G20 presidency, believes an endorsement of the TFCD report recommendations by the G20 can be expected. As the influence of the business world on the outcome of the G20 has historically been strong, there is also a chance that recommendations from the B20 will shape the output of the G20 summit on green finance further. One of the points that the B20 companies raise continuously as important is the creation of “some form of gradual standardization and definition of green finance along to, for example, the Green Bond Principles and disclosure requirements of the TFCD” to create a common understanding, Mildner says. Another important point, she says, is that: “Corporates keep reminding us that there is still a big lack of information and too little data on green finance. And we are currently considering, whether it would make sense to assign a mandate to the G20, UNEP or the OECD to get more involved and collect and process data that is useful for corporates to work with afterwards.”Joint statements can be influential political tools. Should the B20, T20 and C20 be able to craft an impactful joint statement, the green finance output under the G20 German presidency may be scaled up even more. While the content of such a joint statement is difficult to foresee at this stage, Bak details the goals of the T20 under the German presidency: “We are targeting that infrastructure investment be subject to the consistency with Paris accord pledges. It’s still the case that multilateral development banks can make investments in coal assets and other infrastructure assets which are not consistent with a country’s Paris agreement commitments.”
Carbon pricing is another T20 goal as it seeks to complement the existing renewable energy policies through the promotion of carbon pricing that goes beyond greening the energy system to greening economies, she says. Thirdly, the T20 calls for sustainable finance disclosure mechanisms to be set up. The T20 Taskforce will call on G20 countries to establish national sustainable finance roadmaps and to conduct bilateral reviews of these with their G20 peers.
Considering the influential coalitions of investors on divestment and decarbonisation, Wolff says regarding a joint statement of the B20, T20 and C20:
“I would be rather optimistic that something like this can be put together.”