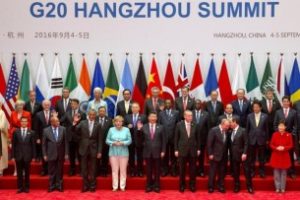 The so called ‘Hangzhou Consensus’ adopted on September 5 in Hangzhou, China, sets the growth agenda for the G20 and hints strongly at a new economic drive to combat climate change by the world’s biggest economies.
In sweeping political language, it commits to ‘catalyze new drivers of growth, open up new horizons for development, lead the way in transforming our economies in a more innovative and sustainable manner and better reflect shared interests of both present and coming generations’
Fine words. But what they mean is key.
As reported yesterday (September 5) on RI, the G20 communique makes a number of broad statements about scaling up green financing and removing challenges to deployment, especially around long-term incentives and data measurement. A report published this week by MSCI underlines the problem. It points out that just 20% of the companies listed on its All-Country World Investable Markets Index (MSCI ACWI IMI) disclose carbon emissions, meaning investors/researchers must primarily rely on estimates.
This is where the work of the Financial Stability Board’s Task Force on Climate-related Financial Disclosures (TCFD) to report early next year will be key.Mark Carney, Governor of the Bank of England and co-chair of the Green Finance Study Group (GFSG), whose synthesis report was welcomed yesterday by the G20, and whose work underpins the G20’s green finance move, said, after the release of the communique: “The adverse effects of climate change threaten economic resilience, growth and financial stability. Given the scale of the investment capital needed, financial markets are best placed to finance the transition to a low carbon economy.”
Joel Kenrick, Senior Associate, Finance and Economics at the London-based European Climate Foundation, put together a handy primer on the parts of this week’s communique that reflect where financial markets could be allied to G20 governments’ policy.
On energy, the G20 reaffirmed a commitment to ‘shaping an affordable, reliable, sustainable and low greenhouse gas (GHG) emissions energy future while utilizing energy sources and technologies’ and continued investment in interconnection and sustainable energy projects’.
On energy efficiency, it said members would explore innovative collaborative arrangements for international cooperation. It endorsed the G20 Voluntary Action Plan on Renewable Energy and G20 Energy Efficiency Leading Programme, notably work on improving the efficiency of heavy goods vehicles.’
And importantly, on fossil fuel subsidies, the G20 committed to rationalize and phase-out inefficient fossil fuel subsidies that encourage wasteful
consumption over the medium term. The lack of a date to phase out fossil fuel subsidies, while not unexpected, disappointed many. The G7 had earlier this year set a phase out date of 2025, and many including Aviva and other major insurers, had called on the G20 to adopt a 2020 deadline.
On the COP21 Paris Agreement ratification and multilateral talks, the leaders committed to sign up as soon as possible to enable it to enter into force by the end of 2016. That followed the hugely symbolic sign up of both the US and China and last week. The leaders also said they looked forward to meaningful outcomes of ‘related multilateral fora, including the Montreal Protocol and the International Civil Organisation.’
Kenrick said the ‘verve’ with which China had sought to integrate climate into the G20 agenda had been visible in the G20 meetings and reflected the growth of China’s low carbon economy. China and the US, he said, have put significant diplomatic pressure on G20 peers to formally join the Paris Agreement. Several are expected to do so in New York later this month. China also started the global discussions about the much needed process to make the financial system compatible with the science based targets agreed in Paris: “Both the Bank of England and People’s Bank of China have been leading this work, and with the industry-led FSB climate task force reporting at turn of the year it will be incumbent upon the German G20 presidency in 2017 to pick up the baton,” he said.Andrew Voysey, Director for the Cambridge Centre for Sustainable Finance welcomed the G20’s “watershed” decision to consider how to ‘green’ the financial system’ but warned that important innovations by financial institutions worldwide were “currently happening at the margins”. “If we are to truly green the financial system, such innovation needs to be accelerated urgently into mainstream practice.’
The Centre worked as a knowledge partner for the Green Finance Study Group, and its work on the G20 communique can be found here
China’s leadership on climate was also recognised by Greenpeace. Executive Director Jennifer Morgan, said: “Investors should pay careful attention and not miss the movement forward on shifting the trillions of dollars from dirty to clean investments.”
Zhou Xiaochuan, Governor of the People’s Bank of China, and co-chair of the GFSG, said: “The global financial system has a major role to play in mobilizing private capital for investments in green sectors, and appropriate incentives should be given to green investment.”