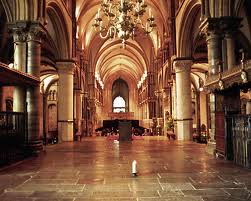 The national assembly of the Church of England has heard how its investment arm is working with the Grantham Research Institute on Climate Change as part of its investment initiative on climate change.

The Synod, which starts tomorrow (July 8) and runs until July 12, is the deliberative and legislative body of the Church.

In a letter ahead of the Synod, the Church’s Ethical Investment Advisory Group (EIAG) has detailed the partnership formed between the church’s investment bodies and the Grantham Institute, which is operated by the London School of Economics’ and chaired by former World Bank chief economist, Nicholas Stern.

The Grantham Institute will work with an undisclosed data provider to help create “an online tool” to display forward-looking analysis of how companies and sectors align with the transition to a low-carbon economy.

The move is part of the newly-created Transition Pathway Initiative – a venture from 15 asset owners and headed up by the Church of England. Of the remaining members, only the UK’s Environment Agency Pension Fund has made itself public.In 2014, a motion affirming that the Church “treats climate change as an urgent ethical issue of the utmost importance, including in its practice of ethical investment” was passed almost unanimously by the General Synod. But the latest move is not focused purely on ethics – some members of the Transition Pathway Initiative are not faith-based investors and do not have any ethical policies in place.

“This is about risk, and how companies are dealing with the low-carbon transition”

Adam Matthews, head of engagement for the Church Commissioners and the Church of England Pensions Board, said: “This is about risk, and how companies are dealing with the transition to a low-carbon economy.

“Our sense is that this is a key missing piece of the approach to climate change engagement, that brings to life the reality of the international commitments that have been made since COP21, and how companies are actually aligning themselves with that going forward.” Link to Synod home page