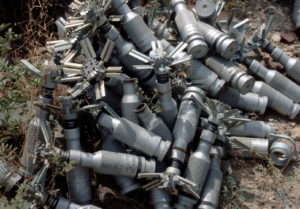 (Updates to delete reference to FDP’s position on executive pay)

According to a survey by the German sustainable investment forum (FNG), both the Social Democratic Party (SPD) and the Greens said that as Germany had signed an international treaty outlawing the weapons, the country must extend the ban that exists for manufacturing and the military to the investment industry.

While big German investors like Allianz, Deutsche Bank, Munich Re and Union Investment have voluntarily steered clear of the weapons, the lobbies for the German insurance industry (GDV) and for the asset management industry (BVI) have failed to get all their members to follow the example set by Allianz and Deutsche.

Merkel’s ruling coalition of Conservative parties (CDU/CSU) and Liberals (FDP) has also seen no reason to oblige German investors to exclude cluster bombs and anti-personnel mines. The CDU/CSU defends this by stating that the international treaty does not explicitly ban the munitions in investments. “On the other hand, we do welcome the financial industry’s voluntary efforts on this front,” the Conservatives added.

Six days before the election, polls suggest that while Merkel will likely be re-elected as chancellor for a third term, the CDU/CSU and FDP are one seat shy of a parliamentary majority needed to govern.Should the centre-right not secure a majority, Merkel’s CDU/CSU would be forced to govern with the SPD, as she did between 2005 and 2009.

That, however, depends on the SPD and Greens keeping a promise to not form a coalition with the Left Party, the successor to the East German Communist party.

The CDU/CSU have come out in support of a German version of Switzerland’s Minder rules on executive pay at listed firms. Answering FNG’s query on this issue, the Conservatives said: “The company’s shareholders should, during annual meetings, cast a binding vote on the executive pay model devised by the company’s supervisory board.”

But the SPD, Merkel’s other prospective coalition partner, does not see Minder as a model either. Instead, it says that there should be an absolute limit on executive bonuses and that 30% of that sum should be paid over four years. The Greens go farther than the SPD, demanding that the tax code be changed so that corporate deductions on executive pay above €500,000 and executives bonuses above €1m are abolished.

Regarding sustainable funds, only the Greens call for minimum labelling standards; it suggests dividing the funds into two categories, so that investors could either pick those that exclude industries like coal or those that specifically invest in clean energy. FNG survey (German)