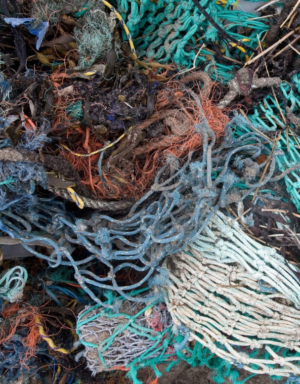 ‘Ghost gear’ is the name given to abandoned, lost or otherwise discarded fishing gear (ALDFG). Each year at least 640,000 tonnes of ghost gear is lost or left in our oceans. Furthermore, the level of ghost gear has increased in recent years and it is likely to grow further as fishing efforts intensify all over the world.

Ghost gear is one of the most harmful forms of marine debris, detrimentally impacting marine biodiversity and the fisheries sector. Recent studies by the Joint Research Centre, the European Commission’s in-house science service, Ocean Conservancy and others indicate that ghost gear is four times more likely to impact on marine life, through entanglement, than all other forms of marine debris combined.

Ghost gear has resulted in millions of marine mammals – including whales, seals and turtles – being killed and mutilated every year. Entanglements can cause serious harm or death, and swallowing plastic remnants from ghost gear can lead to malnutrition, digestive blockages, poor health and death. It is estimated that 45% of all marine mammals on the Red List of Threatened Species have been impacted by lost or abandoned fishing gear.

While it is difficult to offer a precise number, there is an increasing consensus that ghost gear is directly responsible for a 10 percent decline in fish stock levels globally. This is the second most important contributor to fish stock decline, after overfishing, and poses a significant threat to food security.

Ghost gear has many causes. The primary causes: a) snags on rocks, reefs or spires beneath the surface of the water; b) conflict/entanglement with other deployed fishing gear; c) severe weather where gear must be abandoned for safety reasons; and d) gear being cut loose incidentally by other marine traffic crossing over top of it. Other factors, such as lack of good disposal options for end-of-life gear, are also contributors to the problem.

These causes are fuelled by certain conditions, such as the over-allocation of legal fishing licenses, and illegal, unreported and unregulated fishing. Overcrowding, often exacerbated by the presence of industrial and foreign vessels, can lead to gear conflict or it can drive vessels to riskier grounds where gear is more likely to snag. Reducing the amount of lost and abandoned gear requires substantial improvements in fishing management measures, among other approaches

In March 2019, World Animal Protection released the second edition of its Ghosts Beneath the Waves report. The report benchmarked how 25 of the world’s largest fishing and seafood processing companies are handling ghost gear in their operations and supply chains, assessing their policies, management systems, implementation and reporting. It identified best practice examples and offered practical suggestions on the actions that companies could take on ghost gear.

The report highlighted Bolton Group, Thai Union and Tri Marine as examples of companies that could demonstrate tangible action and provide a model for others to follow.It also noted that many companies were taking action on issues such as marine litter and bycatch management.

Despite this progress, it is clear that ghost gear is not yet receiving the level of management attention that it should. Our analysis and discussions with companies suggest that the reasons include a lack of awareness, a lack of clarity on the actions that might be taken by seafood companies, and weaknesses in the external drivers for action.

Given the central role being played by certification standards in supporting and enabling fishing companies’ efforts on marine sustainability, it is clear that these schemes could also play a vital role in encouraging and facilitating action on ghost gear. While ghost gear is not yet fully integrated into many of the fisheries certification requirements, it is getting much more attention. For example, the Monterey Bay Aquarium Seafood Watch requires fisheries with a significant likelihood of ghost fishing to have a comprehensive strategy that includes measures to assess, minimize, and mitigate the impacts of derelict gear from the fishery (e.g., gear modifications, gear-tending procedures, etc.), to establish processes to report gear loss and location.

In the Ghosts Beneath the Waves report, we recommended that all certification bodies should explicitly identify ghost gear as a core element of the certification process with clear guidelines and measurable criteria in place. This will ensure that ghost gear issues are explicitly considered when awarding certifications and when developing action plans and fisheries improvement plans. In turn, this will help ensure the continued credibility and relevance of these standards to the goal of ensuring the future sustainability of marine fisheries.

The Marine Stewardship Council (MSC) is currently reviewing its sustainable fisheries standards. As part of this review, it is considering the breadth and scope of the standard as it pertains to ghost gear. We are therefore inviting investors to sign a letter (available through the PRI Collaboration Platform) that calls on MSC to include ghost gear in the scope of its standards. As an important stakeholder, we hope that this call will encourage MSC to take action on this most important of issues.

Notes
1. Authors: Rory Sullivan (Director, Chronos Sustainability), Elisa Tjärnström (Programme and Research Manager, Chronos Sustainability), Lynn Kavanagh (Campaign Manager, World Animal Protection Canada) and James Corah (Head of Ethical and Responsible Investment, CCLA Investment Management).
2. A copy of the letter and additional information can be obtained from https://beta.unpri.org/group/786/stream.
3. In response to the threat posed by ghost gear to marine animals and their habitats, World Animal Protection launched the Sea Change programme in June 2014, with the aim of protecting marine animals from tragic suffering and death by ghost fishing gear. In 2015, World Animal Protection launched the GGGI, the world’s first and largest cross-sectoral alliance committed to driving solutions to the problem of ghost gear worldwide. Officially supported by 14 governments, the GGGI now brings together almost 100 fishing and seafood companies, retailers and other businesses, intergovernmental and non-governmental organisations and academic organisations. In 2019, World Animal Protection transferred the leadership of the GGGI to Ocean Conservancy.
4. The Ghosts Beneath the Waves report can be obtained from: https://www.worldanimalprotection.org.au/news/ghost-gear-still-haunting-ocean-wildlife-big-business-making-improvements