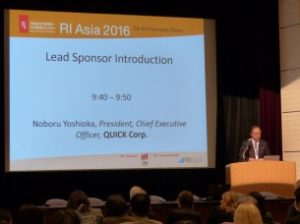 Proxy firm Glass Lewis has signed its second partnership in a week with a new arrangement to supply Japanese financial data giant QUICK.

The deal was announced at the RI Asia event held at the Tokyo Stock Exchange today (February 23).

The new link with QUICK, part of the giant Nikkei group which last year acquired the Financial Times, comes amid a strengthening of corporate governance and stewardship in Japan as Prime Minister Shinzō Abe tries to kick-start the economy.

The ‘third arrow’ of Abenomics has seen the creation of the Principles for Responsible Institutional Investors, a stewardship code based on the UK model as well as its own version of the Kay Review – the Ito Review – and a corporate governance code.

An element of this push is for investors to exercise their voting rights at company annual general meetings.

Alongside this, the influential Government Pension Investment Fund (GPIF), the world’s largest asset owner, has embraced ESG and signed up to the Principles for Responsible Investment (PRI).In 2014 the GPIF awarded a contract to QUICK and others to undertake research into ESG and stewardship.

Under the arrangement announced today, QUICK will begin distributing Glass Lewis data in May to asset owners and asset managers. Users will have access to proxy research on more than 30,000 companies in major markets (including about 2,000 Japanese ones). QUICK said it would assist in investors being able to make “more precise proxy voting decisions”.

They said many Japanese companies are now working toward their AGMS “by examining director candidates and preparing for the evaluation of the board effectiveness”. QUICK’s ESG site is available here (Japanese).