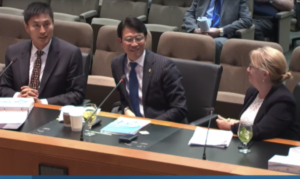 Amends to clarify that Mizuno was referring to wanting to make “performance-based fees” an industry practice, not lowering fees.

Hiromichi Mizuno, the Chief Investment Officer of Japan’s Government Pension Investment Fund, the world’s largest pension fund, has issued a plea at CalPERS for asset owners to collaborate on performance-based asset management fees to “make it an industry practice”.

Mizuno was speaking to CalPERS’ Investment Committee yesterday in a wide-ranging session — in which he was flanked by CalPERS’ CIO Ben Meng and Director of Board Governance & Strategy Anne Simpson — that also covered artificial intelligence, ESG and the benefits, or otherwise, of transparency.

GPIF last year introduced a new performance-based fee structure and multi-year contracts with its active managers in a bid to align interests.

Mizuno acknowledged this had been very controversial but said that, historically, its alpha from active management, net of fees, was zero.

Previously 80% of its internal resource was given over to the selection of active managers: “We needed to change the rules of the game to enable us to win.”

He said that, last year, GPIF managed to save $200m in active management fees because the majority of its active mangers failed to deliver target alpha.

“When I was a General Partner we used to hate CalPERS!”

To applause, he said active managers “shouldn’t be paid if they don’t deliver something they promised”.

He explained that historically, only 18% of the GPIF’s active managers actually delivered target alpha. In the end, 43 out of 46 managers agreed to the new fee regime. Mizuno added that he discussed this with the three managers who walked away.

To laughter, he said: “One manager said they didn’t believe they can ever deliver target alpha, and I said ‘why didn’t you tell us two years ago?’” Another manager said they agreed with the concept but they had “easier money” elsewhere.

This led Mizuno to call for asset owners to collaborate on fees to “make it an industry practice”.

Before joining the GPIF, Mizuno was a senior figure in the private equity industry. “When I was a GP [General Partner] we used to hate CalPERS because CalPERS discloses everything.” Transparency is good but it handicaps the investment team, he said.“Now I’m at the GPIF I’m telling our GPs that we are going to disclose everything. When CalPERS is the only one it will work against you guys. But if we join, and if other people join, it will become market standard.” He said asset owners need to become “more strategic” about transparency.

“GPIF is really committed to being the ultimate ESG investor”

“If a GPIF and a CalPERS decide to work together we can affect the market.”

He said GPIF is working with the Sony Computer Science laboratory to monitor asset managers’ behaviour. “There’s a lot of room for our industry to work with AI but if you think about it, this is an industry where there are thousands of million-dollar-bonus people and I really don’t think they will manage to keep that high remuneration.”

So a universal owner like GPIF or CalPERS should not try to beat the market: “Asset owners get their alpha wiped out every 10 years by financial crises – that’s why beta is so important.”

Mizuno acknowledged that the fund’s portfolio emissions are in excess of 3°C (as reported by RI yesterday) and said the “easy solution” would be to divest fossil fuels. But rather, as a universal owner “we only should be satisfied when the whole market becomes sustainable”.

“It is very difficult to prove that our ESG initiative is adding value to our portfolio over the next month or so maybe over the next three years is going to be difficult. But I believe in 30 years’ time these kind of things will have a huge impact.”

GPIF has asked us to clarify that it is willing to pay more, because it means its external asset managers bring more alpha to GPIF. It said: “Our aim of new fee structure for active manager is not to lower the fees, but strengthen the alignment of interests between GPIF and asset managers, and eventually achieve the investment returns required for the public pension system solely for the benefit of pension recipients from a long-term perspective.”

For details of GPIF’s performance-based fee structure, please refer to this paper by its staff.