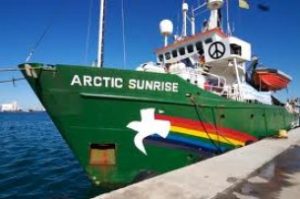 The recent arrest of 30 Greenpeace activists (and the seizure of the Greenpeace ship MV Arctic Sunrise) by armed Russian federal security service FSB agents while protesting Arctic oil drilling by Russian oil and gas company Gazprom has again highlighted both the environmental and governance threats inherent in these controversial and risky projects. In 2012, Shell encountered serious difficulties when they attempted to drill in the Chukchi Sea in Alaska. The multiple operational snafus and the company’s failure to meet US regulatory requirements served as a warning about just how risky it is to drill for oil and gas in the Arctic. Shell’s experience in the Alaskan Arctic has had a knock-on effect: for now at least, both ConocoPhillips and Statoil have shelved plans for drilling in the far north. However, at the same time, yet more alliances with Russian companies are being announced by Shell, BP, Exxon-Mobil and others.
Research by Greenpeace, ShareAction and Platform has explored these alliances, which expose international oil companies and their shareholders (including pension fund members and even council tax payers) to enormous risks. These include poor environmental and safety performance, questionable corporate governance, an unpredictable political, legal and economic regime and a serious lack of corporate transparency. One example leaps out: The Kolskaya rig, hired by Gazprom subsidiary Gazflot, capsized and sank on its way back from drilling in the Okhotsk Sea on 18 December 2011, killing 53 of the 67 crew Link. As the IOCs carry the bulk of exploration costs in Russian JVs, they and their shareholders should be particularly concerned about Gazprom’s operational capability for successful and safe offshore drilling.• The Kolskaya rig sank, killing 53 of its 67 crew after Gazprom’s subsidiary Gazflot continued drilling outside of the approved season and without carrying out all necessary assessments.
• No member of the board of directors has specific offshore experience or special responsibility for offshore projects.
• Gazprom has taken no steps to address the lack of offshore drilling expertise or oversight at board level.
• Gazprom’s headline Arctic JV with Total and Statoil, which was to operate the massive Shtokman field in the Barents Sea, fell apart in 2012 after years of delays, a cost rise from $20bn to $40bn and lack of clarity over fiscal conditions made extraction economically unfeasible.

The boarding of the Greenpeace vessel MV Arctic Sunrise by the FSB acting on behalf of Gazprom, however, raises further issues of governance and oversight for all Shell shareholders. The crew of the icebreaker remain in the custody of Russian authorities following the boarding in international waters. The ship has now been under armed guard since 1900 Moscow time on Thursday September 19. In addition to the operational risks of operating in partnership with Gazprom, as well as the increasingly relevant issues of poor capital discipline – pursuing high risk, big ticket break-even projects – shareholders in Shell now face the reputational risk of the Russian State Security agency, the FSB, acting on behalf of the company to deliver security provision. How will shareholders now respond to this increasing cascade of risks?