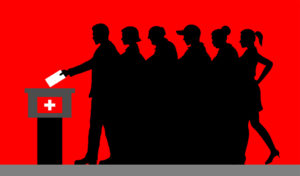 Last weekend, Credit Suisse ran a full page advertisement in the influential Neue Zürcher Zeitung criticising a civil society-led initiative seeking to hold Swiss companies legally accountable for overseas human rights and environmental violations. The extraordinary move underscores the divisions within Switzerland a week before the country is due to vote on two competing proposals which would introduce stricter due diligence responsibilities for Swiss companies.

Up for consideration is a proposed constitutional amendment which would require Swiss companies to carry out mandatory due diligence across their supply chains to identify possible violations of human rights and environmental standards. A company that does not carry out sufficient due diligence and is subsequently sued for such violations will be ‘guilty until proven innocent’, meaning the burden of proof will not fall on the plaintiff – instead it will lie with the company to prove that it is not culpable of any wrongdoing.

A technical distinction but an important one is that the requirement for due diligence will apply to a company’s entire supply chain, while any liability arising from violations only extends to companies which it directly controls.

If the initiative fails to secure majority support among voters, a slimmed-down counter proposal specifying due diligence requirements but only with regards to conflict minerals and child labour will automatically enter into force. The alternative would also require large companies to publish a sustainability report in line with the EU’s Non Financial Reporting Directive – already mandatory under EU law – but does not introduce a new liability regime for violations. Non-compliance with these rules can result in a maximum CHF100,000 (€92,500) penalty.

However, the counter proposal has not managed to win over supporters of the initiative who believe that stricter laws are key to preventing corporate wrongdoing by the many multinational companies and commodity traders that are based in Switzerland.

Vincent Kaufmann, CEO of governance advisory body Ethos, said to RI: “The alternative proposal makes only a minimum compromise while ignoring the wide range of material ESG factors which is addressed by the original proposal. Despite well established norms, controversies involving multinationals still continue, which suggests that relying solely on international conventions and the enforcement of local laws is insufficient. We believe that effective due diligence should include all relevant environmental and social risks.”

Kaufmann also criticised the decision to drop the original proposal’s liability framework, likening the counter proposal to “a watchdog without teeth”. The suggested CHF100,000 fine has prompted ridicule from other commenters who say that the nominal figure is unlikely to sway corporate decision-making. A Swiss comedian recently poked fun at the counter proposal, suggesting that companies should just pay the fine in exchange for a free pass to do whatever they wanted.

While polls have shown popular support siding with the original proposal, the measures have faced strident opposition from the Swiss establishment – particularly in relation to the ‘guilty until proven innocent’ liability clause. Companies say that it will trigger an avalanche of lawsuits that would cripple operations and put them at a disadvantage to competitors. Meanwhile, the Swiss Government has framed the proposition as a threat to Swiss jobs and prosperity.

There is little evidence for these claims. In France, which introduced the world’s first mandatory due diligence laws in 2017, only one lawsuit has been initiated alleging improper due diligence.

Nina Roth, a Director of Responsible Investment at BMO Global Asset Management, finds the critical response puzzling. “I’m surprised at the strength of the opposition to these proposals. If they are adopted, civil liability for non-compliance will only arise if a company did not carry out due diligence and as a result were exposed to violations in their supply chains but actually, we know that many large Swiss companies already have due diligence systems in place. Separate from any law, it is a competitive advantage for businesses to have a handle on potential supply chain risks so that they can be managed and mitigated to prevent any sudden surprises.”

At the same time, Roth is optimistic that the counter proposal will be enough to spur change. “Currently there is no legal requirement to perform any due diligence on ESG issues,” she points out, “So to have a mechanism in line with international conventions such as the UN Guiding Principles is a major improvement.”

Others say that regardless of the referendum’s outcome, it is the responsibility of government to support effective corporate due diligence and ensure that companies are not disadvantaged.

Tyler Gillard, who leads the OECD’s work on due diligence, says: “While we don’t take a view on either proposal, it’s important that whichever option is taken is done in a way that aligns with international benchmarks, is reinforced by government measures to give businesses the tools and information necessary to comply with the requirements, and includes the appropriate incentives.”

As an example, he points to an EU initiative to recognise industry-driven due diligence certification schemes for companies exposed to conflict minerals, in addition to EU guidelines to help companies identify conflict affected and high risk areas to do business. Governments also have access to customs information which could be used to assist companies determine the provenance of goods instead of forcing them to rely on third-party service providers. According to Gillard, these approaches can help to drive down costs and reduce inefficiencies.

“Due diligence requirements are not solely for the benefit of industry, but can also create legal drivers for governments to take more serious action, including in relation to their own due diligence and supply chains,” he argues. “Governments are the largest buyers in the world, so they are equally exposed to environmental and social risks.”